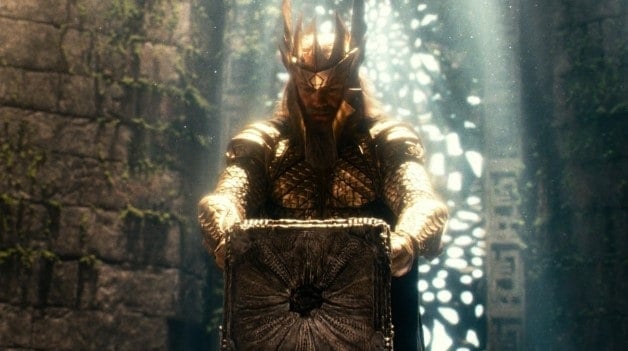 More Justice League concept art has surfaced and this time it is for the Ancient Atlantean King.

Actor Julian Lewis Jones played the Ancient Atlantean King in Zack Snyder’s Justice League. It was only a brief appearance as the character was basically relegated only to securing away the Atlantean Motherbox in a vault. Still, the new concept art just goes to show the tremendous amount of pre-production work that goes into figuring out each character’s look and the King was no exception.

How Martian Manhunter Could Have Looked In ‘Justice League: Mortal’

Via his Instagram , Jones posted a picture of some never-before-seen concept art of the Ancient Atlantean King, with particular attention shown to the character’s elaborate crown. Of course, this is only one look out of many over the course of the three months that went into designing his costume for Justice League. You can check out the post below:

Julian Lewis Jones is not the credited actor who plays the ancient Atlantean King seen in the new Aquaman movie, so it is not clear whether or not the two are meant to be one and the same.

‘Young Justice: Outsiders’: Nightwing Is In A Relationship With [SPOILER]

What do you think about this concept art? Does it at all make you any more appreciative of how much work each crew member puts into their film behind the scenes? Let us know in the comments below!

Aquaman is now playing everywhere. The DCEU will continue next with Shazam! which will be released in theaters on April 5, 2019, and will be followed by Birds of Prey (And The Fantabulous Emancipation of One Harley Quinn) on February 7, 2020, and Wonder Woman 1984 on June 5, 2020. A standalone Joker film set outside of the DC Films universe starring Joaquin Phoenix as the Clown Prince of Crime is also set to hit theaters October 4, 2019.

Stay tuned to Heroic Hollywood for the latest news on the future of the DC Extended Universe.