Justice League vs. The Fatal Five will find the titular team of heroes joining forces with new allies to stop a sinister group from the future and three fan-favorite voice actors will reprise their respective roles as Batman, Superman, and Wonder Woman. Mary Ellen Thomas, Warner Bros. Home Entertainment Vice President, Family & Animation Marketing, made the following statement on the upcoming animated film and the return of actors Kevin Conroy, Susan Eisenberg and George Newbern:

“Justice League vs. The Fatal Five is an important addition to the DC Universe Movies, spotlighting two unlikely young heroes with real-world issues facing off against a daunting quintet of futuristic villains. We’re also are proud to have Kevin Conroy, Susan Eisenberg and George Newbern reprising their seminal roles as DC’s Trinity in the Justice League & Justice League Unlimited animated series, and believe the fans will be equally pleased with their return to these characters.”

Battling the Invisible Menace (Featurette)– This featurette will explore the nuanced hero as many characters must deal with the everyday feelings of anxiety, depression, and other incapacitating emotions that we all must battle and overcome.

Justice League vs. Fatal Five:Unity of Hero (Featurette) – A look at how the pantheon of DC heroes has never been more diverse and inclusive, as writers and artists break boundaries and smash stereotypes.

Sneak Peek Revisited: A Preview of Justice League Dark – John Constantine leads a group of misfit characters that use magic to vanquish their opponents.  This is the dark version of The Justice League taking on the malevolent forces that go beyond our plane of existence.

Sneak Peek Revisited: A Preview of Justice League vs. Teen Titans – A glimpse into the characters known as the Teen Titans.

From the DC Vault: Justice League Unlimited, “Far From Home”

From the DC Vault: Legion of Superheroes, “Man of Tomorrow”

Watch The Official ‘Justice League vs. The Fatal Five’ Trailer

You can view the box art for the Blu-Ray and 4K releases below! 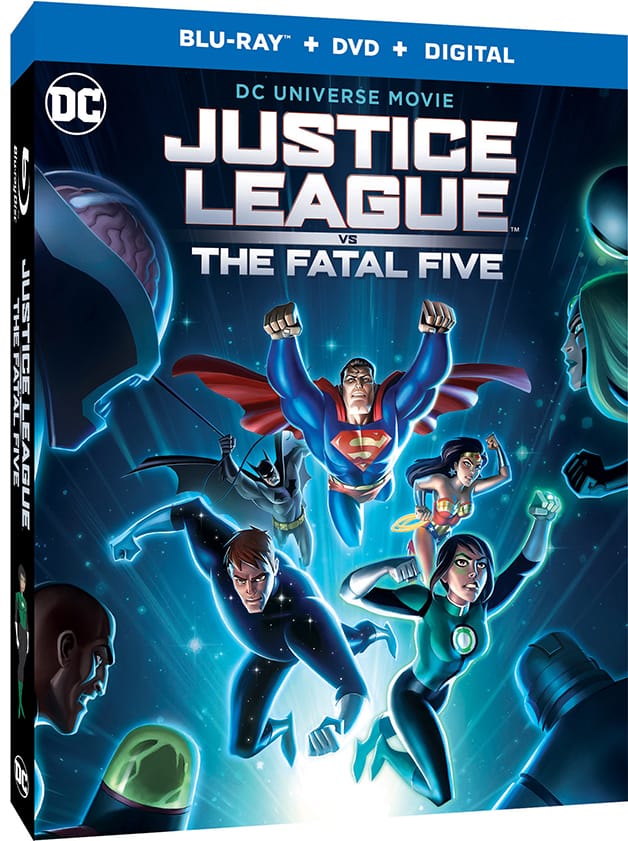 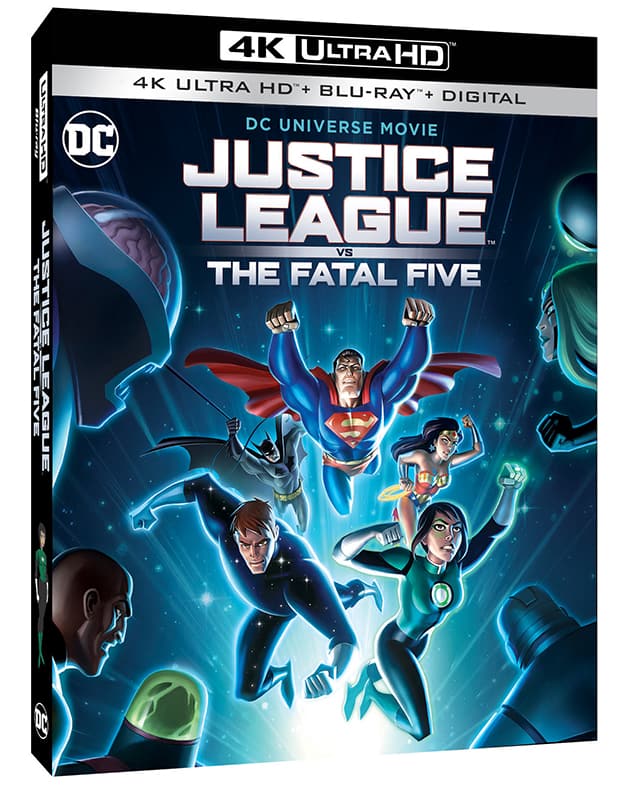 The film has been rated PG-13 for “sequences of sci-fi violence, some bloody images, language and partial nudity.”

Justice League vs. The Fatal Five finds the fate of the earth hanging in the balance when the Justice League faces a powerful new threat — the Fatal Five! Superman, Batman and Wonder Woman seek answers as the time-traveling trio of Mano, Persuader and Tharok terrorize Metropolis in search of budding Green Lantern, Jessica Cruz. With her unwilling help, they aim to free remaining Fatal Five members Emerald Empress and Validus to carry out their sinister plan. But the Justice League has also discovered an ally from another time in the peculiar Star Boy — brimming with volatile power, could he be the key to thwarting the Fatal Five? An epic battle against ultimate evil awaits!

The hi-res images range from stills to behind the scenes photos featuring directors Zack Snyder and David Ayer working with cast members including Gal Gadot as Wonder Woman and Will Smith as Deadshot. In addition to the new images of Jared Leto's Joker, a new image of Gadot as Wonder Woman in her own standalone film is included among the hi-res stills.

You can check out the images in the gallery below.

The DCEU continues this month with Aquaman which is now playing and will be followed by Shazam! on April 5, 2019, Birds of Prey (And The Fantabulous Emancipation of One Harley Quinn) on February 7, 2020, and Wonder Woman 1984 on June 5, 2020. A standalone Joker film set outside of the DC Films universe starring Joaquin Phoenix as the Clown Prince of Crime is also set to hit theaters October 4, 2019.

From Warner Bros. Pictures and director, James Wan comes an action-packed adventure that spans the vast, visually breathtaking underwater world of the seven seas, “Aquaman,” starring Jason Momoa in the title role. The film reveals the origin story of half-human, half-Atlantean Arthur Curry and takes him on the journey of his lifetime—one that will not only force him to face who he really is, but to discover if he is worthy of who he was born to be… a king.

Aquaman is now playing. Stay tuned to Heroic Hollywood for the latest news on the future of the current DC cinematic universe as we learn it.

Previous1 of 34Next
VIEW IN GALLERY