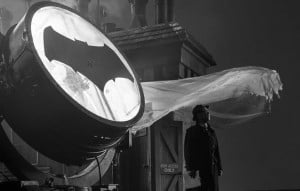 Years after his much praised performance as J. Jonah Jameson in Sam Raimi’s Spider-Man films, J.K. Simmons will be moving into the DC Extended Universe as Commissioner James Gordon with his character set to debut in the upcoming Justice League. However, before will see Simmons take on his second iconic comic book role, audiences can see him in the upcoming thriller The Accountant where he stars opposite his DCEU co-star Ben Affleck.

While promoting the film, Simmons spoke with Collider about his first day on the set of Justice League. Considering the first scene Simmons filmed involved most of the Justice League members gathering on the rooftop of Gotham’s police headquarters, Simmons commented on his feelings regarding the magnitude of the sequence:

“Yeah well there’s not a lot of ‘small’ on those kinds of sets. When you’re working with Zack Snyder ‘small’ is not the word that comes to mind, or any of those DC Universe kinds of projects. I mean there are two schools of thought about that for actors. It is kind of nice, in a way—especially when you’re playing a supporting part—to start out just kind of doing a little ‘Oh and then you’re gonna walk down this hall, say hi to this guy, and that’s your day’s work.’ Kinda get your feet wet. Or whether it’s better to just dive into the deep end and get some of the heavy stuff out of the way. It was fun, I mean that whole universe is something I’m really excited to be a part of for a while down the road hopefully.”

Fans have only been given a small glimpse of the DCEU version Commissioner Gordon at this point, but Simmons commented on the process of giving the character a look that was very faithful to the comics:

“And that’s what I wanted very much to do. As we sort of went back and forth with Zack and I and the wardrobe and hair and makeup and all those people, saying how we wanted the look to be, I think we all ended up being very much on the same page.”

You can watch the entire video interview by following the link below.