Zack Snyder took to Vero to respond to fans still supporting the release of the Justice League Sndyer Cut.

The Justice League Snyder Cut is this generation’s Superman II: The Richard Donner Cut. The infamously edited DC team-up wasn’t exactly maligned by DC fans when it was released in 2017, but the removal of director Zack Snyder’s vision was something that fans of the DC Extended Universe seemed disappointed in. One year later, the demand for the Snyder Cut hasn’t slowed down and doesn’t seem like it will until it’s officially released.

Zack Snyder took to the social media platform Vero to respond to a banner that he saw flying through the sky, saying “#ReleaseThe SnyderCut.” Check out the photo below to see the love that Snyder has for fans who wish to see his vision completed. 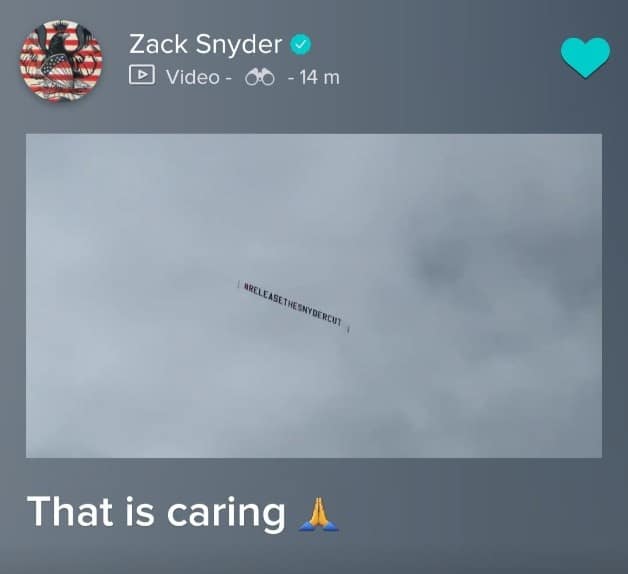 Even though Justice League wasn’t a Fantastic 4 level trainwreck, it seems like it was enough of a disappointment to push many changes, such as Walter Hamada becoming the President of DC Films. Considering Richard Donner’s Superman II and David Fincher’s Alien 3 finally saw the light of day, there’s certainly hope that the Justice League Snyder Cut will be released one day, though nobody from Warner Bros. or DC have confirmed a planned release just yet.

We’ll be sure to keep you updated on all news regarding Justice League and the Snyder Cut as soon as more information becomes available. Were you a fan of the theatrical cut of Justice League? What are you hoping to see changed the most in the Snyder Cut? Let us know your thoughts in the comments below!