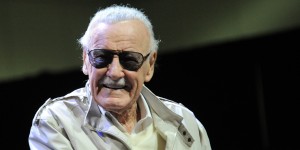 Love him, or hate him, Stan “The Man” Lee has been a pioneer in the comic book genre since the 1960s, and with the success of the Marvel Cinematic Universe, it continues. Despite being well into his 90s, the co-creator of The Avengers, Spider-Man and The Hulk, is incredibly involved in the development of the future MCU films. This past Friday, a special Academy Award-Consideration screening was held for Marvel Studios’ latest film, Captain America: Civil War, at which Marvel Studios President Kevin Feige, revealed just how the studio acquires the 93-year-old for all his amazing cameos.

We do not shoot random ones. They’re always very specific,… A couple of months ago in Atlanta, he flew down and we shot four in one day — for four various projects. They’re all awesome! They’re all totally different. And he was unbelievable. He was on fire. He came in, he sat here, he stood there, he stood in this window, and then he went home.

I bet people did not expect that, huh? Marvel currently have four movies in active production, with Doctor Strange, Guardians Of The Galaxy Vol. 2, Spider-Man: Homecoming and Thor: Ragnarok and as a result of this, it would make a ton of sense to have “The Man” himself come into the recurring filming location of Atlanta. This year alone, Lee has appeared in Deadpool, Civil War, and X-Men: Apocalypse. If you recall correctly, Lee revealed a year ago that his favourite of his cameos came from Marc Webb’s The Amazing Spider-Man, in which he portrayed a librarian listening to loud classical music as Spidey and The Lizard fought in the background.

With this being said, what is your favourite Stan Lee cameo? It will be really fascinating to see how Marvel place Lee in the upcoming Doctor Strange, as well Spider-Man: Homecoming.