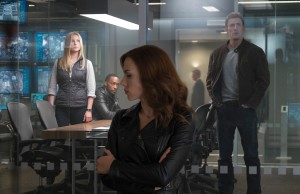 Fans have been clamoring for a Black Widow standalone film since the first Avengers movie was released back in 2012, and now they might just have an answer. Speaking to Collider, Marvel Studios president Kevin Feige was asked about the supporting Avengers characters and had the following to say:

“I would say certainly the one creatively and emotionally that we are most committing to doing is Black Widow, we think she’s an amazing character [and] we think Scarlett Johansson’s portrayal of her is amazing. She’s a lead Avenger and has amazing stories in her own right to tell that we think would be fun to turn into a standalone franchise.”

He went on to say that a solo film for her is not part of the next nine films that they will be releasing between now and 2019, but a film for her is definitely something Marvel is considering. This means Captain Marvel will be the first Marvel standalone female character to receive her own film. Marvel certainly seems to be paying attention to what audiences are looking for, but they have a lot to do with their main story-line before they can focus on spin-off character films like Black Widow.

Are you excited for Black Widow standalone? What would you want that film to be about? Discuss in the comments down below.