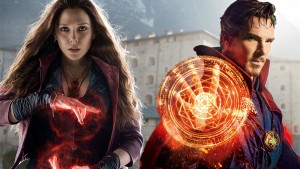 With the arrival of Marvel’s next blockbuster, Doctor Strange, set to hit theatres everywhere in November, it is around this time fans will be provided juicy details about the character’s placement in the Marvel Cinematic Universe. When Comicbook.com visited the set of the film, they asked Marvel Studios President Kevin Feige to discuss the difference between Scarlet Witch’s magic, and Doctor Strange’s. Since the release of 2015’s Ant-Man, and the arrival of the quantum realm, fans have speculated about the involvement of the “Reality” Infinity Stone in Doctor Strange. Feige initially believed that there was no real comparison between the two at all, as Scarlet Witch’s powers were being finalised as Doctor Strange head into production. However, the producer had some more explicit details to provide:

“Her powers, she’s never had any training, I’m talking about Scarlet Witch. She never had any training; she’s figuring it out. Arguably, you could say that that’s why her powers are much more chaotic and much more loose in the way that we showcased those light effects.  In [Doctor Strange], some of what you might see today, even the cover of Entertainment Weekly, it’s much tighter. It’s all about focus. It’s all about pulling energies from other dimensions in an organized and purposeful fashion, which is why they can do a lot more than she can in, at least, a much more precise way.”

That said, Marvel fans will recall an abundance of times the two heroes have crossed paths in the comic book world, and with the confirmation of Doctor Strange in Infinity War, one would assume the two will unite on screen. So what do you guys think? Is Feige telling the truth or is it a quick continuity fix?

Doctor Strange hits theatres everywhere on November 4, 2016, while Captain America: Civil War is out now on Blu-Ray and DVD.