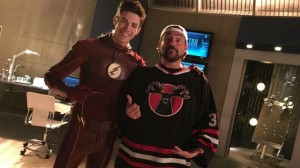 Director, comic writer, podcaster and all around geek Kevin Smith recently invigorated his career for the small screen when he directed the season two episode of The Flash titled, “The Runaway Dinosaur,” which was a hit among fans and critics. The director really enjoyed working on the show so much not only was he tasked with directing an upcoming episode of Supergirl titled “Supergirl Lives,” he will also direct the seventh episode of the third season of The Flash. With season three already in production, the director is now getting ready to film that episode in Vancouver. Deep in the Berlanti-verse up in Canada, the director has been able to see the first two episodes of season three that are now complete and has nothing but praise for them.

“I saw episode 1 and 2 already, because they are up to shooting episode 6 right now, so I’ve seen episodes 1 and 2 cut together. Phenomenal! The bar is high, so I’m kind of worried about that.”

The director already knows that the show has high expectations and after watching the first episode, he knows he has his work cut out. Currently, he is coordinating with the production crew on the seventh episode coordinating location, extras, clothing, and many other things for the upcoming episode. Because he mentions “ice-related” clothing, is Captain Cold going to be on the episode? The director is scheduled to begin filming this Wednesday. Season three will be adapting the “Flashpoint” storyline, where after going into the past and saving his mother from the Reverse Flash and therefore, and changing history, everything might not be as peachy as planned.

Blinded by anger, Barry Allen (Grant Gustin) unwittingly plays into Zoom’s game and uncovers the evil speedster’s true goal: to destroy all Earths in the multiverse. In the race of his life, Barry ultimately gets the upper hand against Zoom and defeats his nemesis. But unable to celebrate victory, Barry makes a world-shaking decision and speeds back in time to the night his mother died to stop Reverse Flash from killing her, irrevocably changing his past and redetermining his future.

The Flash Season Three premieres with “Flashpoint” Tuesday, October 4th on the CW.