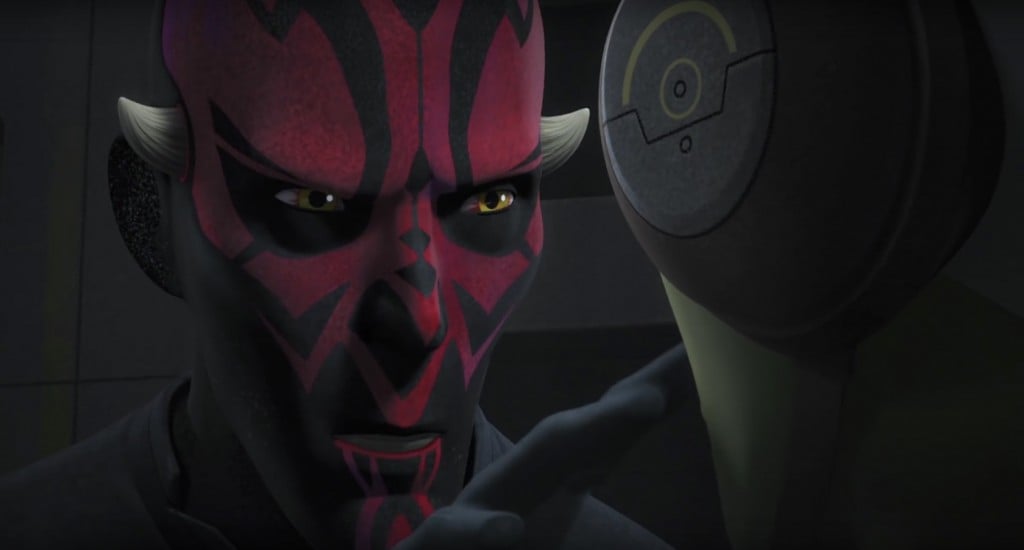 Last weekend was the beginning of a new season for Star Wars Rebels, and a new clip for season 3 episode 2, Holocrons of Fate. In the episode, Ezra and Kanan attempt to recover an artifact that can save them from Darth Maul after he takes the crew of the Ghost hostage.

Within the trailer for the episode, Maul is shown using a mind control tactic similar to Kylo Ren’s from the recent Star Wars: The Force Awakens. Maul uses mind control on Hera in order to figure out what Ezra may have done with the Sith Holocron that Maul so desperately is after. It’s an impressive trick, and one that he has not been shown to use before.

The Holocron was obtained by Ezra last season, after Maul had used him to retrieve it. The artifact started to turn Ezra to the dark side, but he ultimately did not hand the Holocron over to Maul as he decided that the power would have been too dangerous in Maul’s hands.

Are you looking forward to seeing Darth Maul’s mind control power, and do you think its something he will use again as time goes on? Part of me thinks he’s a fool for not busting that one out much earlier. Either way, let us know below in the comments!

Check out the full trailer below to see for yourself:

Having established a secret base on Atollon, the Ghost crew, now led by a more powerful Ezra, strengthens the rebel fleet by acquiring new resources and recruits eager to stand against the Empire. However, the Imperial efforts to eliminate the rebellion are now being led by the coldly analytical Grand Admiral Thrawn, whose strategic, tactical, and cultural insights make him a threat unlike any they have faced before. In Season Three, Ezra and Sabine take on new roles and challenges as the rebels prepare for their biggest mission yet — a direct assault on the Empire.