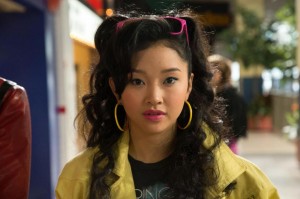 As the superhero trend continues into November with the release of Doctor Strange, there is no stopping the comic book movie train. X-Men: Apocalypse star Lana Condor (Jubilee) has revealed her annoyance at the lack of Asian representation in these superhero films. A major talking point for Doctor Strange stems from the casting of The Ancient One, a typically Asian character is now portrayed by a white woman. Condor was one of just two Asian actors in superhero films this summer, the other of course being the show-stealing Karen Fukuhara who played Katana in Suicide Squad.

In an interview with Inverse, the actress stated, “We’re highly underrepresented.” The actress is currently in Canada promoting the Blu-Ray/DVD release of Apocalypse. She continued, “I love that I’m doing this because I want to show Hollywood that people don’t just like this, but it actually works, especially in big blockbusters. I’m hoping I made a small impact for us fellow Asians, in Hollywood and in life.” Speaking of Suicide Squad, Condor was over the moon with the appearance of Katana, saying “I was so happy to see that… Now all the franchises have one! Let’s go!”

It is really tough to argue with Condor, Asian representation in these films have been severely lacking, and it seriously needs to change. However, Apocalypse did not do the best job at showcasing Jubilee in all her glory as the character had a sheer lack of screen time when compared to her allies. Condor took this on the chin, stating, “I want to prove to everyone she is epic and she can be amazing and powerful,” she said. “I wanna fight. I would love to fight.”

So what do you guys think? Personally, I seriously think comic book films must improve their representation of all races and genders, but with the huge success of Suicide Squad and the Captain Marvel film, hopefully, we are heading towards a more diverse future.