‘DC’s Legends of Tomorrow’ returns with its seventh episode tonight at 8/7c on The CW with ‘Marooned’. The network released a short behind-the-scenes promo this afternoon to prepare fans for the Legends’ first foray into outer space.

Featuring a brief interview with Executive Producer Phil Klemmer, the preview shows the team getting captured by some of Rip Hunter’s old friends known as “time pirates”. Scoffing at Professor Stein’s excitement about the Wayfarer’s space-traveling capabilities, the team ends up having to be rescued by “60-something bad-ass” Professor Stein. It seems the grumpy physicist will yet again be a focus character for the show.

After some of ‘DC’s Legends of Tomorrow”s effects-heavy early episodes, this almost seems to be the show’s first “bottle episode”. This is a term used for money-saving episodes that are primarily character-based, taking place within a frequently used setting, such as the team’s time-traveling ship The Waverider. With hints that the Legends could be facing a change in line-up soon (such as the return of Hawkman), could this be the episode that sees off one of our current team members? Martin Stein seems to be  getting a lot more screen time than others, so he could be safe. Especially since he’s the ship’s resident genius (sorry, Ray Palmer).  It also looks like we’ll be getting a bit more background on what it is exactly Rip Hunter does (or, rather, did) as a Time Master. 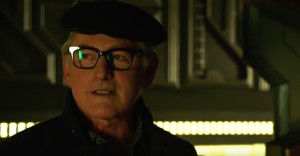 ‘Inside Legends’ seems to be a recurring series on The CW’s YouTube channel, providing a weekly look at both the upcoming episode as well as some quick interviews with the writers, actors, and producers.

And despite its sister (or brother?) shows ‘The Flash’ and ‘Arrow”s brief hiatus, the popular superhero team-up show is moving full steam ahead with its sixteen-episode series.