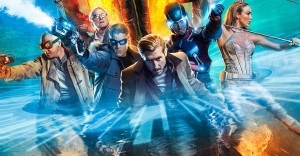 Towards the end of the first season of DC’s Legends of Tomorrow, the threat of the Thangarians was teased. Looking at one of the possible timelines, they would end up taking over the planet and unleashing Armageddon. The threat was so dangerous that the Time Masters thought that Vandal Savage was a reasonable alternative to them. Naturally, we would expect the big baddies for season two to be the Thangarians. However, that does not appear to be the case.

Executive Producer Marc Guggenheim stated that the show will be going in a different direction for the upcoming season. While the threat of the Thangarians will remain on everyone’s minds, it will primarily be in the background and we will have a mystery villain.

“Unlike season 1 of Legends, where we basically had the big bad introduced in the crossover, what we’re going to do in season 2 of Legends will be more similar to what you’ve experienced in the first three seasons of Arrow or the first two seasons of Flash, where it’s more of a slow reveal and a little bit of a mystery,”

As for who the new villain is, we will find out soon enough. In the meantime, expect members of the Justice Society of America to be a part of the second season of the show. Actor Nick Zano joined the cast for the upcoming season as Nate Heywood/Citizen Steel. We already know that Rex Tyler/Hourman will be on the show based on the first season finale appearance by actor Patrick J. Adams. With the second season finale of The Flash revealing the true Jay Garrick/The Flash, we should expect other members of the Justice Society of America to join the show, or at least make an appearance.

Legends of Tomorrow returns this fall to the CW Network.