New sets based on 'The Lego Batman Movie' have been revealed that feature new vehicles & classic villains from the upcoming film.

While The Lego Batman Movie is set to hit theaters in just under two weeks, the Lego company will release a series of sets based on the film this June. Fans will given their first look at the new Lego sets at the New York Toy Fair next month, but now The Hollywood Reporter has revealed a sneak peak at the upcoming line.

The lineup includes the set pictured above, which features the Batwing along with Batman and Robin figues. Each set includes a classic Batman villain and the Batwing set will come with a Harley Quinn figure, complete with her giant hammer and a cannon.

The Hollywood Reporter offers the following details on the Batwing.

The Batwing reportedly retails for $89.99.

The set pictured below is titled “Scarecrow Fearful Face-off” and will include a figure of the masked villain himself along with his Gyro-Copter. The Gyro-Copter will feature both rotating propellers and bomb-dropping capabilities. 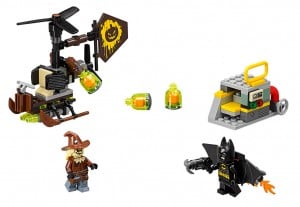 The set titled “Bane Toxic Truck Attack” will feature the massive villain and his six-by-six truck. Also included are a Batman figure with a Whirly-Bat vehicle. 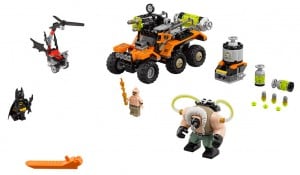 Finally, the set titled “Two-Face Double Demolition” will feature the titular villain and his double-sided excavator. This time the Batman figure will be accompanied by the Batcycle and two GCPD officers. 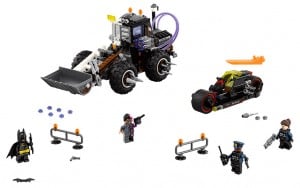 What do you think of the upcoming sets? Will you purchasing any or all of them for yourself?

“In the irreverent spirit of fun that made “The LEGO Movie” a worldwide phenomenon, the self-described leading man of that ensemble – LEGO Batman – stars in his own big-screen adventure: “The LEGO Batman Movie.” But there are big changes brewing in Gotham, and if he wants to save the city from The Joker’s hostile takeover, Batman may have to drop the lone vigilante thing, try to work with others and maybe, just maybe, learn to lighten up.”

The Lego Batman Movie will be released in theaters on February 10, 2017