An in-depth reveal of the new Mortal Kombat movie revealed Lewis Tan’s mystery role as well as the first look at Sub-Zero.

Thanks to an extensive first look at the new Mortal Kombat movie, which arrives in theaters and on HBO Max on April 16, fans have finally discovered who Lewis Tan is playing in the film. And although many theorized he’d be playing an iconic fighter from the series like Scorpion or Kung Lao – the star explained to Entertainment Weekly that he’s playing a “washed-up fighter” named Cole. He was born with mysterious birthmark on his chest in the shape of the Mortal Kombat symbol – which is how he winds up on a violent new journey.

“When we first meet Cole, he’s in a really bad spot. He’s down on his luck. He’s kind of a washed-up MMA fighter who used to be a champion, who used to believe in himself, who used to have a lot of hope in his career. And it’s all gone down the drain.”

The huge first look at Mortal Kombat comes from Entertainment Weekly, which also revealed that along the way, Lewis Tan’s fighter will meet other legendary characters like Jax Briggs, Sub-Zero and Sonya Blade. Tan had previously called the role a childhood dream and has since been very enthusiastic about working on the film. Take a look at Lewis Tan as Cole, Chin Han’s Sub-Zero and Mehcad Brooks as Jax Briggs (complete with cybernetic arms!) below. 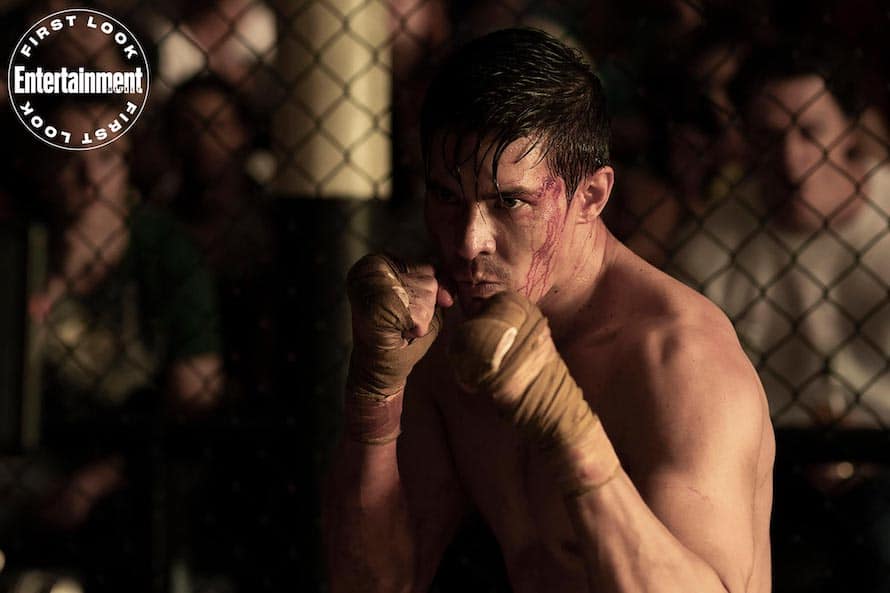 What do you make of the new images from Mortal Kombat? Are you excited to see Lewis Tan’s Cole face-off against characters like Sub Zero and Mileena? Sound-off in the comments below!

Mortal Kombat was first adapted into a feature film directed by Paul W. S. Anderson, the filmmaker behind the Resident Evil series with Milla Jovovich. The film earned a worldwide total of $122 million and is widely regarded as one of the better adaptations of a video game.

Stay tuned to Heroic Hollywood for all the latest news regarding the Mortal Kombat movie, Lewis Tan and Sub-Zero and make sure to subscribe to our YouTube channel for more content!