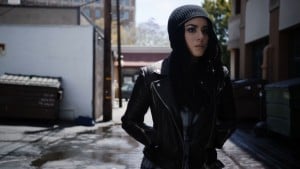 Since the death of Lincoln on the season three finale of Agents of S.H.I.E.L.D., our favorite Inhuman, Daisy AKA Skye, AKA Quake, has been starting to “break bad.” Not only is she wanted by S.H.I.E.L.D. for setting off earthquakes but now she’s hanging with Robbie Reyes AKA Ghost Rider. To top it off, she’s no longer disapproving of his killer vigilante methods. Now that Daisy has been on the lam, she no longer has complete access to S.H.I.E.L.D resources (other than what YoY o can steal for her) and her “quake” powers are starting to take a toll on her.

It doesn’t look like it’s going to get much better for her as well. According to Daisy herself, actress Chloe Bennet says:

“It’s taking a toll on her physically and emotionally. What we’re seeing this season is more physical than ever before. Pretty early on, it becomes incredibly limiting, the pain she’s going through. There’s a reason S.H.I.E.L.D. monitors people with powers and abilities, because they need to be. She’s basically overworking herself. She’s being incredibly reckless with her emotions, physically with her powers. It definitely takes a toll.”

While it’s starting to be a problem now and her fellow agents want her to come back home, her defiance might be what is doing her in. It’s clear that she’s hurting herself by using her powers without S.H.I.E.L.D.’s ability to help, she needs her magic gloves. But her reluctance for help and her reliance on her powers will further weaken her.