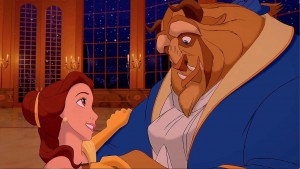 Hamilton’s Lin-Manuel Miranda is quite a big fan of Disney’s Beauty and the Beast! The Broadway star joined a roundtable of musical heavy hitters to reflect on the 1991 Disney classic as a part of a bonus feature that will be included on the special anniversary release of the film. The bonus feature will be called “Menken & Friends: 25 years of Musical Inspiration.”

In this EW-exclusive clip, the roundtable can be seen discussing the film and it’s importance to the musical genre of films. Leading the pack is musical genius Alan Menken (composer being Beauty and the Beast, The Little Mermaid and Aladdin, just to name a few)and he has included Lin-Manuel Miranda (who will be featured in upcoming Disney film Moana,  Stephen Schwartz, Kristen Anderson-Lopez (Frozen) and her husband/Frozen collaborator Robert Lopez.

While discussing the opening number of Beauty and the Beast, Lin-Manuel Miranda describes his favorite part -when Belle gushes over her favorite part of the book she’s reading, foreshadowing her own adventures to come – to the group, first asking if “we can nerd out for a second.”

Her favorite book is actually the story she’s going to live. So there’s this crazy bit of foreshadowing that’s happening, but it’s also that interrupting your thought to say how excited you are, is the kind of sophisticated, character-revealing lyric writing that (lyricist and Menken collaborator) Howard Ashman was so good at.

Beauty and the Beast was groundbreaking in that it was the first animated feature to get an Oscar nomination and paved the way for Disney Broadway musicals. “‘Belle’ was the song that broke it all open,” Menken says. “We really wanted to write this like a real Broadway musical.” With a live-action film in the making, Beauty and the Beasts’ legacy and influence is as strong as ever.

Beauty and the Beast Signature Collection edition will be available on digital HD and Disney Movies Anywhere on Sept. 6 and Blu-ray/DVD on Sept. 20