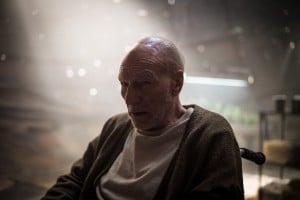 Throughout the nearly two decade lifetime of the X-Men film series Charles Xavier has been a constant presence, whether he has appeared in-person or been a guiding influence on a character’s own adventures. While Hugh Jackman has declared that Logan will be his final appearance as Wolverine, fans have wondered what the future will holds for Patrick Stewart as the older Charles Xavier. In an interview with Screen Rant, Stewart discussed his approach to playing an older Professor X and his future as the character.

Patrick Stewart revealed how he first heard about the film and his reaction to script.

“Word had subtly drifted to me thanks to my team there was to be another one and soon after that – and by the way, I was at once interested, because the X-Men movies have played a very important part in my life, not in terms of career but in just sheer pleasure of the work – and then soon after that word began to filter through that I should maybe erase all I did as a past X-Men/Wolverine movies from my mind because this was going in a very different direction.”

“Oh yes [laughter]. It was an absolute treat. Diversity and contrast have always been very important to me in the work that I do. I’m not interested in repeating the same thing over and over and over again. Being the same kind of person. To already have existing a history of a character over five, maybe six movies, and then, to have him blown apart, Charles Xavier as he is in Logan was thrilling for me. A little challenging at times because we had to, and we did with James Mangold spend a lot of hours talking about how are these changes visible and evident in Charles Xavier? How far can we push him? When does he retreat back inside himself? When, for any brief moments, does he become the Charles Xavier that we have known and hopefully liked over the years? All of that was just grist to the mill for me.”

“Well there is a significant backstory anyway. That exists, you can’t tamper with that, but there have been other events between the last time we saw the X-Men and Logan. There was a time in the screenplay that this background was illuminated a little more visibly but that was then reduced. We only hint at incidents that have occurred in the not too distant past that have brought about the world that Logan and Charles are now living in.”

Stewart reiterated his previous comments about being open to returning as Professor X and continuing to explore the relationship between Xavier and Magneto.

“Ian and I just finished six months on stage together and I think he was quietly quite cross that he was left out of this film. And I missed him too. In a franchise like this I don’t think, despite the fact that Hugh [Jackman] has said it, you really can never say never again. I am open to any future interest there might be in another Charles Xavier.”

Though Stewart could not name any specific stories he would like to see adapted, he reaffirmed his willingness to return as Professor X.

“I have never been deeply involved in the comic books. So, what future stories there might be I am entirely ignorant of but if they come up and there might be a nod in Patrick’s direction, that’s fine by me.”

What comic book stories featuring Professor X would you like to see adapted on film? Share your thoughts below!