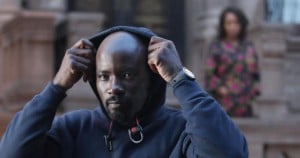 Luke Cage showrunner Cheo Coker has been revealing the episode titles for the upcoming Netflix series on a weekly basis. The upcoming Marvel show is promising to have a hip-hop slant including musical numbers performed on the show. Each episode title will be based off of a song by legendary hip-hop group Gang Starr.

The first four episodes titles are:

Coker just tweeted the title for the 6th episode:

After a sabotaged experiment leaves him with super strength and unbreakable skin, Luke Cage (Mike Colter) becomes a fugitive who attempts to rebuild his life in modern day Harlem, New York City. But soon he is pulled out of the shadows and must fight a battle for the heart of his city – forcing him to confront a past he had tried to bury.

Luke Cage will be released on Netflix September 30, 2016