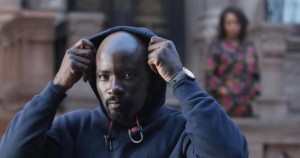 With the release of the latest trailer for Netflix’s Luke Cage, showrunner Cheo Coker also continued his weekly ritual of revealing the episode titles for the upcoming Marvel/Netflix TV show. As stated before, the show will have a heavy hip hop influence including having musical numbers on the show, a killer soundtrack, and the score my done by music producers Adrian Younge and Ali Shaheed Muhammad. Each episode title will be based on a song by legendary hip-hop group Gang Starr.

The first six episode titles are:

Coker just tweeted the title for the 7th episode:

Episode 7 will be “Manifest” based off of Gang Starr’s No More Mr. Nice Guy debut album from 1989.

After a sabotaged experiment leaves him with super strength and unbreakable skin, Luke Cage (Mike Colter) becomes a fugitive who attempts to rebuild his life in modern day Harlem, New York City. But soon he is pulled out of the shadows and must fight a battle for the heart of his city – forcing him to confront a past he had tried to bury.