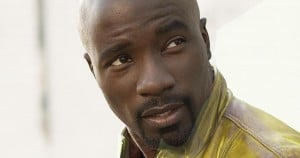 One hidden gem from last year’s Marvel’s Jessica Jones show on Netflix was Luke Cage. He was introduced at first as a mysterious character who crossed paths with the super powered private eye. The two bonded not only on the fact that they were super-powered people in New York but also because they were loners and found comfort with each other. The two ended up temporary lovers before Cage vanished. Now Marvel is getting ready for the Luke Cage spin-off show as part of Marvel’s relationship with Netflix. While we have been treated to casting news, and the occasional rumor/comment from actors and producers, including that showrunner Cheo Hodari Coker described the show as “The Wire of Marvel Television,” we haven’t heard much as to the plot of the show.

Luke Cage himself, Mike Colter sat down with EW for a video interview where he offered a few details for the upcoming show, including that the show will have a political angle to it.

“There are politicians and then there are shady characters that function on the other side of the law. Who does what? I won’t say, but this becomes a situation where there are a lot of people who want to help Harlem and think they have Harlem’s best interests, but, ultimately, just because they think or say they have Harlem’s best interests, sometimes they’re being very selfish or being very short-sighted. So sometimes what they’re doing is actually harming the community.  So this is where Luke comes in because Luke is a person who likes to, he observes and he listens and he takes in to account what people tell him, and he’s a pretty smart guy himself and he understands that some peoples’ way may not be the best may not be the best in the big picture. So ultimately Luke has to get involved because there are a lot of things that happen, a lot of people get hurt, a lot of lives are lost and unfortunately he’s the only one who is capable of actually helping deal with this because sometimes the law enforcement is actually not the best because they’re not aware or they’re not capable, or maybe they’re corrupt. So, without getting into too many details, Luke Cage is gonna have to step up and be the man.”

Colter also stated that tonally the show will be different than Daredevil and Jessica Jones has been. When asked if there would be any superhero guest stars like Daredevil or Jessica Jones, he was no so forthcoming with an answer.

Daredevil season one and two as well as Jessica Jones season one are available now on Netflix. Luke Cage premieres on the streaming channel September 30, 2016.