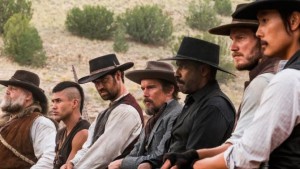 The Magnificent Seven wrangled in $1.75 million Thursday night after debuting at 3,096 locations across the country. Columbia and MGM’s remake of the 1960 classic Western is on target to score big in the box office this weekend.

The film, presented in association with LStar Capital and Village Roadshow Pictures, is tracking to earn $30 million-plus. Directed by Antoine Fuqua, the film has an estimated production cost of $90 million. This would be a huge start for a Western.

2016’s Magnificent Seven was screened during the opening night of the Toronto Film Festival. It currently has 63% rating on Rotten Tomatoes. is actually a remake of a remake of the

The movie, about a group of seven men who team up to protect a small town, is a remake of a remake of Akira Kurosawa’s “Seven Samurai” inspired the 1960 John Sturges western of the same name.

The film will face off against Warner Bros’ animated feature, Storks, this weekend; with projections putting Magnificent Seven ahead. Storks is expected to earn between $20-30 million.

Can either film top Tom Hanks and Sully, which has been at the top of the box office the past two weekends in a row. What do you think? Have you seen Magnificent Seven? Do you plan to? Sound off below!