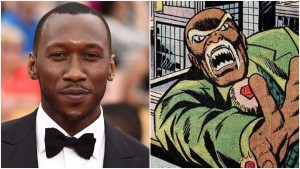 Mahershala Ali has been slowly burning up the big and small screen for quite some time. The actor from both such hits as The 4400, The Hunger Games: Mockingjay Parts 1 and 2, and House of Cards was recently promoting his latest film The Free State of Jones where he plays an escaped slave Moses Washington. While most of the interview he discussed such issues as slavery and the state of race in society, he was able to share a few details about his upcoming role in Marvel’s Luke Cage on Netflix where he will play villain Cornell Stokes aka Cottonmouth.

He describes his character as a “Godfather-Mafioso” type of villain, who is sure to be a challenge for the lead character Luke Cage (Mike Colter). While discussing the upcoming TV Series, he also stressed its importance in regards to cultural diversity.

“There are going to be so many kids out there who get to see a black man on that screen and aspire to be like him. We didn’t have that. They get to be included.”

He also stresses the need for young black kids to have positive images beyond entertainment as well, where he ever refers to the current president as a superhero.

“When I grew up, it was a lie to us that you could be anything you wanted to be. Because we knew we couldn’t be president. What this generation has is President Obama — he’s a superhero for us. And I think that might be hard for people to really embrace and understand.”

With Luke Cage being centered in Harlem, NY and having a large cast of African-Americans and even a strong “hip-hop vibe”, as well as Marvel’s Black Panther film having a cast that will be more than 90% African and African-American, the images of diversity and cultural representation in comic book films/TV shows will be changing in the near future and much more inclusive and helping develop some of these images that Ali is talking about.