El Mayimbe dropped an enormous scoop this Tuesday, in regards to the Father of Peter Quill, The Star-Lord, and the name Captain Marvel might sound familiar, but maybe some of you are unfamiliar with the character’s almost 50 years of history. I’m going to walk you through the highlights of Marvel Comic’s premier Silver Age Spaceman.

The original Captain Marvel (Mar-Vell), debuted in Marvel Super-Heroes #12 in December of 1967, created by writer-editor Stan Lee and designed by artist Gene Colan. Mar-Vell is probably the most unique silver age creation of Marvel Comics, and their strongest legacy character that has inspired or powered a number of characters in 616 continuity, Making the Mar-Vell name just as important in canon as in real life.

Mar-Vell originated as a Kree soldier sent to infiltrate Earth, and evaluate us as a possible threat to the vast Kree Empire. He assumed the identity of a deceased earthling named Walter Lawson, and regularly steps in to aid those around him. His original costume is a traditional Kree military uniform and his superhero name comes from humans mispronouncing his name as Marvel, which is a particularly Stan Lee humorous touch. 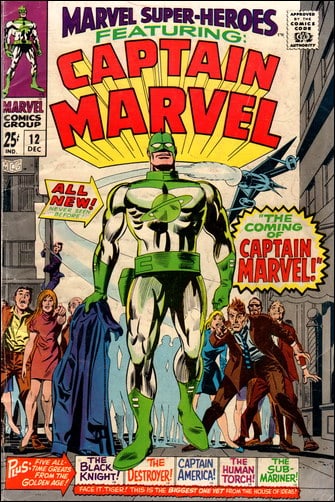 Eventually, Mar-Vell is recalled to stand trial for treason, having compromised his mission on too many occasions by helping the people of Earth. He is found guilty, but he escapes into deep space and succumbs to space madness, allowing Ronan the Accuser and his evil cohorts to use him to Overthrow the Kree Supreme Intelligence. Mar-Vell is given an updated costume and greater power, including the Nega-Bands, but ultimately the plot is foiled and he is trapped in the Negative Zone on his way back to Earth. 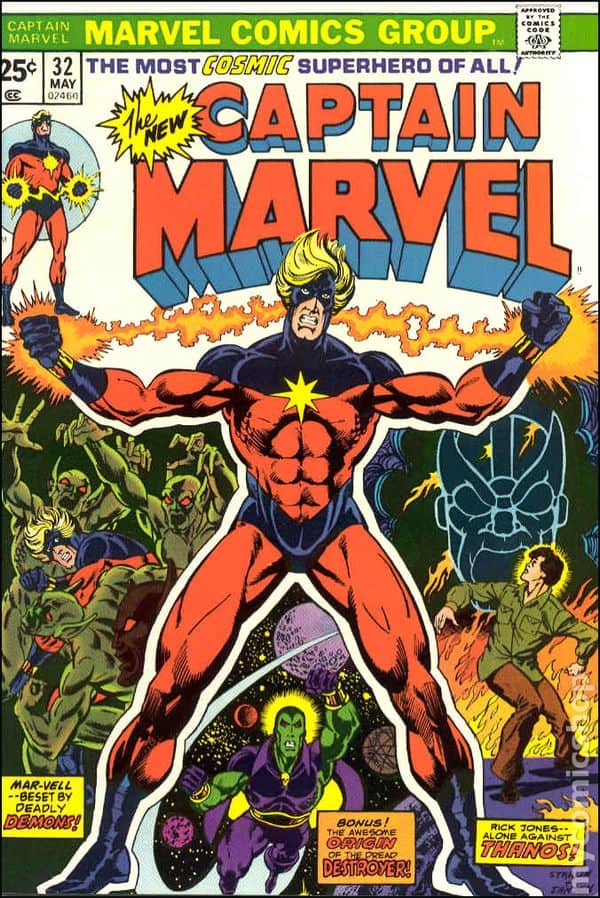 The Supreme Intelligence grants Mar-Vell the ability to psychically bond with Rick Jones. Rick is able to switch places with Mar-Vell for three hours at a time and for a time they work together to protect the citizens of Earth. Sharing a bond and switching places with a young man is a cute callback to Shazam but it was ultimately not right for the character and the idea was quickly abandoned.

Mar-Vell having gone through two failed launches would hit the character’s creative and popular peak with Jim Starlin in the seventies, where Starlin utilized Mar-Vell to create his complex space opera tales.  During these adventures two very notable things occur: Mar-Vell is exposed to a nerve gas called Compound 13, and during an explosion his DNA is merged with Carol Danvers of Earth turning her into a Human-Kree Hybrid.

Compound 13 turns out to be highly carcinogenic, and although the Nega-Bands have held it at bay they also prevent any known treatment. Mar-Vell was banished from the Kree Empire as a traitor and is thus unable to seek their advanced medical technology for aid. In the most powerful and moving death of a marquee hero, readers watch as the cosmically aware and enlightened Mar-Vell accepts his fate and prepares to meet it with friends and enemies paying tribute. The Skrulls even sent an envoy to honor Mar-Vell as their greatest and most noble adversary. Mar-Vell is greeted by a vision of Thanos and his love Death; Thanos has come not to fight but to escort his foe to the other side. 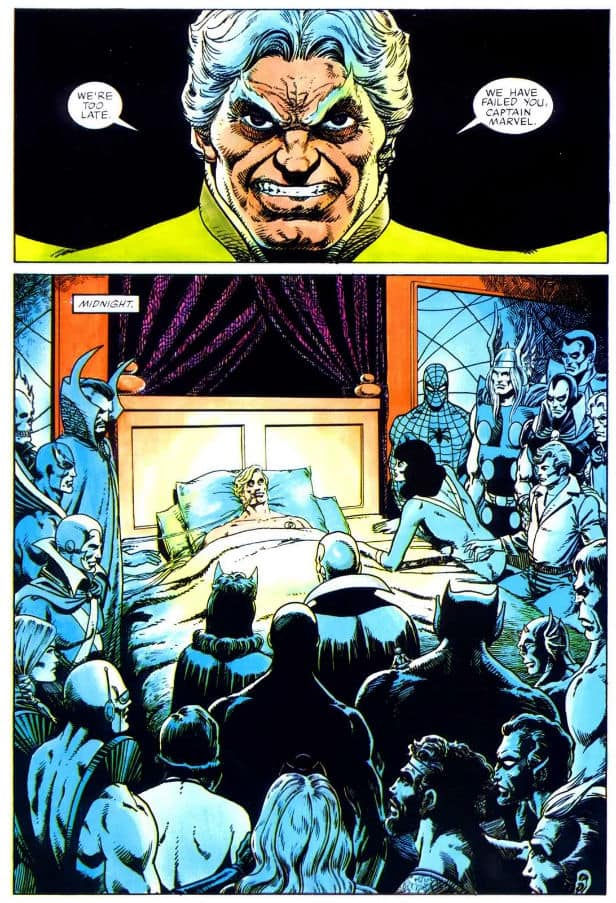 The final panel of the avengers gathered around Mar-Vell’s deathbed, is the most haunting and moving tributes to a fallen hero in comics’ history. Years later, when Superman was beaten to death by a knock-off Hulk, called Doomsday, I would reflect on how much more powerful Mar-Vell’s death was, how much more of an artistic statement it was, and how much more it moved me. It still does. Death comes for us all and it makes no difference who we are or how it comes, only how we face it.

Carol Danvers would assume the mantle of Captain Marvel as the first legacy character to carry the name. But she is not the only character to carry it, or the only character in the 616 universe to share his genes. Phylla-Vell who took on the mantle of Captain Marvel is his artificially created child. It has also been revealed that Hulkling of the Young Avengers is Mar-Vell’s child from an affair with Princess Anelle of the Skrull Empire. Talk about some pelvic sorcery!

Mar-Vell’s is a key player in the larger cosmic plans of Marvel and their cinematic universe, and he absolutely needs to be in play before we see Carol Danvers on screen in 2018. Maybe he’s dying of cancer, similar to the cancer that killed Peter’s mother? Perhaps, that is why he seeks out his long lost son, and why he left him in the first place. To protect him from the price of his power.

There are a lot of great stories attached to the original Captain Marvel, what are your favorites? Share them below.