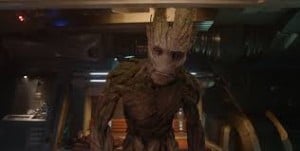 With less than a year before Guardians of the Galaxy Vol 2 hits theaters, Marvel is already in full on merchandising mode for the upcoming sequel. After all, the first film grossed more than $770 million worldwide, the sequel is expected to be even bigger and better. Marvel was at the Licensing Expo 2016 in Las Vegas, Nevada where they showed off some of their upcoming merchandising. At the Expo, Hasbro, Lego, Funko and LB Kids were other licensees who were there. It should come as no surprises that fan favorite from the first film, Groot is expected to be a big draw for merchandising for the sequel.

The “Dancing Groot” was a big draw from the first film, and Marvel is expecting to further market Groot for the next film. Paul Gitter, senior VP of licensing for Marvel at Disney Consumer Products stated that the campaign is to turn Guardians of the Galaxy into a full-fledged franchise.

“As affinity and awareness for the ‘Guardians of the Galaxy’ franchise and its characters continue to grow by leaps and bounds, we are building out a much larger merchandising program to meet the increasing demand from fans,” he said.

There are plans to a wide range of appeal for new merchandise across multiple age and demo groups, specifically for Groot.