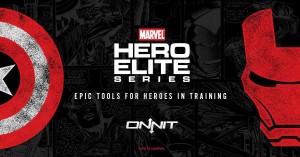 Now you can workout with themed equipment from Onnit, The leader in unconventional training equipment is teaming up with the biggest heroes in the Marvel Universe to form a team of truly epic proportions.

The “series of functional fitness equipment” is inspired by iconic Marvel characters and designed to “help you build super-strength.” Ahead of the launch in October, Onnit has released a couple of short videos highlighting equipment that they plan to release.  The first two character inspirations are Captain America and (fittingly) Iron Man.

Introducing the Marvel Hero Elite Captain America Shield Urethane Barbell Plates by Onnit. These functional barbell plates are modeled after Captain America’s iconic shield and are made from top-quality polyurethane with a steel center.

And in the spirit of Captain America: Civil War, we cannot forget Iron Man. Onnit just announced a kettlebell, modeled after Iron Man’s helmet, that will be released as part of the new fitness equipment line.

Introducing the Marvel Hero Elite Iron Man Helmet Kettlebell by Onnit. This fully-functional 40lb kettlebell is made of chip-resistant iron and has been meticulously sculpted after the iconic Iron Man helmet.

Anyone participating in #SDCCFit  should get on this! What do you think about this heroic team up?