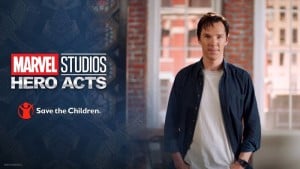 Marvel has taken the initiative to support and bring hope to kids around the world with their new program Hero Acts. Benedict Cumberbatch announced the program in a video today which you can watch below.

“Heroic Acts is a global initiative focused on bringing help and hope to kids around the world when they need it most.”

According to the video, the idea for Hero Acts sprung up during the filming of Doctor Strange.

“We filmed Doctor Strange in Nepal and several other countries, and everywhere we went in the world I met Marvel fans, but I also saw kids who were facing enormous challenges, challenges that no one should ever have to face. With the help of our fans, Hero Acts can change that.”

To support children around the world with the charity Save the Children, all you need to do is post a photo of yourself at MarvelStudioHeroActs. The photo then must be shared across social media with the hashtags #heroacts and #marvelstudios. With each post, Marvel will donate $5 to the Save the Children charity which will help bring learning materials to kids in Nepal, Haiti, and the United States.

To find more about Save the Children, click here.