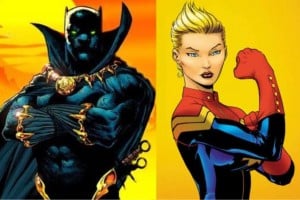 It’s no secret that Marvel is doing a heavy push for diversity going forward. After all, in the comics, there is a black Captain America, a black/Hispanic Spider-Man, a female Thor, a female Captain Marvel, a female Wolverine, and a Pakistani-American Ms. Marvel. To further broaden their base and be more representative of society, Marvel is also pushing for more diversity in their Marvel Cinematic Universe (MCU) films as well. In addition to Jessica Jones and Agent Carter, Marvel has a Captain Marvel film on the horizon. With the introduction of Black Panther in Captain America: Civil War, T’challa will soon have his own film, Black Panther and Netflix’s Luke Cage will show up on the small screen towards the end of the month.

During the Long Beach Comic Con, there was the “A Marvel-ous Universe!” panel where some Marvel Studios writers and producers had a discussion about the Marvel universe. One fan asked a question related to the delay in having a woman or a person of color as the lead in their films. Agent Carter writer Brandon Easton had the following to say.

“There are things that go on behind the scenes, political and financial, which are ultimately the same thing, that the average consumer knows nothing about.

Easton also shared a little bit of inside baseball about the approval process that is bringing Black Panther and Captain Marvel to the big screen.

“We had a lot of plans on the hopper… We had Black Panther, which we’re doing now, other projects that I can’t mention… We want to make those movies, but we answered to people who have different ideas. Even Kevin Feige answered to people who had different ideas at the time. But after ten years, we finally scraped them off our boots, and now you’re seeing those movies, you’re seeing Captain Marvel. Those fights have had rooms for a long time.”

Sounds like there this has been a long-fought battle and the process takes time. Lucky for us, we will finally get to see some of these characters we have been waiting for and adding some diversity to Marvel.