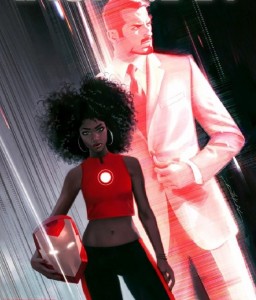 As Marvel Comics continues their “All-New Marvel” launch, we are looking at even more changes and diversity for some of our favorite comic characters. The next character to go through a radical change is Iron Man. In the aftermath of the Civil War II arc, it appears that Tony Stark will no longer wear the mantle of Iron Man. Filling in his shoes will be Riri Williams, a 15-year-old black woman who is a student at MIT. A child prodigy, much like Tony Stark was, Williams already created her own Iron Man armor out of spare parts while a student in college. She was introduced in the Invincible Iron Man series, and will soon be taking over Tony Stark.

Creator of the character Brian Michael Bendis will remain as the writer for the new volume of the Invincible Iron Man series with the Riri Williams taking over. Given his track history, Bendis has no problem adding more diversity to Marvel’s roster.

“Thankfully because of my involvement in the creation of Miles Morales and Jessica Jones and some other characters, it’s getting the benefit of the doubt from even the most surly fans. There are fans who say, ‘Show us the new stuff,’ and then there are fans who say, ‘Don’t do anything different from when I was a kid.’ So when you’re introducing new characters, you’re always going to have people getting paranoid about us ruining their childhood. I’ve been down this road with Miles Morales, Jessica Jones, Maria Hill. I knew I was in good hands with Mike Deodato and other artists who are helping visualize Riri.”

Of course, this might make some fans think that Tony is going to die at the end of the Civil War II arc. Bendis advises fans not to get too ahead of themselves.

“More people are going to be upset that they think they know the ending to Civil War II now than anything we just talked about. But I can tell you just because we’re hearing what we’re saying doesn’t know you mean how Civil War II ends. We’re not telling you the end, at all.”

Riri will be taking over in the new Invincible Iron Man series this fall.