Actress Megalyn Echikunwoke will make her live action debut tonight on Arrow as the character Vixen, a character she has already been playing in her animated form on the CW Seed. 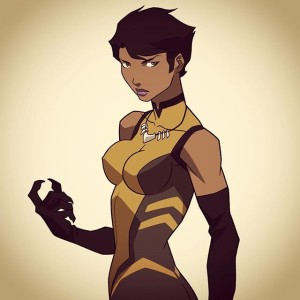 For those unaware, the ‘Vixen’ web sereies tells the story of Mari McCabe after she inherits her family’s Tantu Totem, which gives her the supernatural ability to call upon the strength and skills of any animal she thinks of, and this power lets her fight as Vixen to stop threats like those that claimed her family.

The series currently has 6 episodes and can be watched on the CW SEED app, and features the appearances and voices of Stephen Amell as Green Arrow, Grant Gustin as The Flash, Carlos Valdes as Cisco Ramon, and Emily Bett Rickards as Felicity Smoak.

ComicBook.com recently caught up with Echikunwoke and got her to discuss tonight’s episode.

Q – When you signed up last year, we talked a lot about the possibility of you coming to live-action. Did you always know this was going to happen?

I didn’t know that I would be doing this until early January. There was talk of it, but definitely I did not know any concrete plans, so I was definitely very pleasantly surprised.

Q – The on-camera version of the costume looks different from the animated version. How exciting was it to step into that suit after you kind of got used to being in Mari’s head in the animated series?

Oh! So exciting! For any actor, whenever you get a costume, it’s exciting because it’s the last layer of the character that really kind of snaps you into that character. But when you’re playing a superhero, even more so obviously. The costume is everything and in some cases is the power, so it was very exciting and the people over at Arrow are really so talented. All of the costumes are amazing.

It’s definitely different from the animated series, or any costume that you’ve seen Vixen in, in the comic books, but I think that’s because it’s very in-keeping with the aesthetic of the show. Vixen is very much in this episode, stepping into Green Arrow’s world.

Q – When we see Mari in the trailer, you’re very badass, as opposed to the kind of beginner-level Vixen we saw in the first season of the show. Is that because time has passed, or just that same answer — that you’re keeping with the feel of Arrow.

There has been some growth. Some time has passed, definitely, between the animated series and my appearance on Arrow. Green Arrow, Vixen and The Flash are more friendly — they’ve become superhero friends, and they have a working relationship. Maybe they’ve come to help me out in Detroit at some point. So not a ton of time, but definitely some time has passed and I’ve definitely grown into my powers and accepted them and learned to use them.

Q – For those of us who are big comic book people, Vixen and Vibe have a long connection. Is there any chance we might see you head to The Flash anytime soon?

There is a possibility. There’s nothing in stone, but potentially anything’s possible. I think Vixen could go anywhere, which is one of the cool things about her character; she’s friends with everyone at school, you know? She’s in almost every group.

Q – I like the choice to put you in Detroit, because now you’re the first DC superhero on TV who’s protecting a real city. Does that help to give you a really concrete idea about what Vixen is up to when she’s not on camera?

I think it does help, and I think it gives you a sense of her purpose, as well. She has an edge for sure and she has a darkness inside of her, for sure, but her purpose is more in service of good and to help people, so to me, I see her in this kind of struggling city, helping out, and being a hero.

I think Detroit, New York — she spent some time in New York — that all informs who she is and how she uses her abilities and why.

Q – Obviously your totem was one of the first magical artifacts in the Arrowverse, but now there’s a lot more of it. Can you talk about how that affects your relationship with Green Arrow?

I think the Green Arrow has a lot of respect for that, and understands that we can combine forces to really make a difference in a way that some other characters can’t, and I think that’s why he comes to me.

Q – Okay, a silly question to close it out: In the recent Deadpool movie, that character took a pot shot at Detroit. What do you think Mari would have to say to him?

Oh, yeah! I saw that, actually. I would say he should come to Detroit and find out what it’s really like!

Vixen will make her live action debut tonight’s episode of Arrow titled “Taken” at 8PM on The CW.