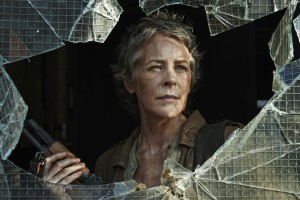 With the season premiere for The Walking Dead coming next month, the anticipation is astronomical. With such a cliffhanger from last season, everyone is eagerly waiting to see who Negan’s victim will be from the group. The premiere has been promised to be mind-blowing as well as heartbreaking. Recently actress Melissa McBride, who plays fan-favorite Carol on The Walking Dead say down and talked about the upcoming season premiere.

When asked about keeping the secret about who the unlucky victim of Negan will be, she exclaims that it’s somethings fans are constantly asking.

“They ask, but they don’t try to get me to spill the beans. They ask and it’s a lot of me saying, “If I could tell you, would you really want me to tell you?” And then they’re like, “No. I want to know, but I want to wait. I don’t want to know. I don’t know if I want to know. It’s driving me nuts!”

When talking about last season’s cliffhanger and fans’ reactions to it, McBride said it’s worth the wait.

“Oh, I’ve heard it. I’ve heard it all. But, you know, it’s entertaining. It’s compelling and some people like cliffhangers, some people hate them, and that’s just part of the experience. But I hope those people that feel jilted will tune in because the premiere is just going to be… oh God, it’s going to rock the walls. The wait is worth it. Whether you’re angry with it or whether you liked the cliffhanger or whether you’re pissed off about it, the wait is worth it.”

No matter who is on the receiving end of “Lucille,” the season premiere will be explosive.  Are you excited about the upcoming season premiere of The Walking Dead? Sound off in the comments.