The universe is a dangerous place full of infinite possibilities, so humanity is lucky that the Men in Black are there to protect them. Unfortunately, in a world where anything is possible, it seems that humans, especially in the summer of 2019, can’t avoid soft-reboots of classic movies.

Men in Black: International, a soft-reboot slash quasi-sequel to the trilogy that helped make Will Smith a household name, is an entertaining, globe-trotting adventure that emphasizes all the best parts of the franchise. Full of cool gadgets and entertaining set pieces, the fourth Men in Black film is a brisk ride that never lingers long enough for the audience to get bored or fed up with the franchise’s bonkers premise.

At the core of the movie is Molly, later known as Agent M (Tessa Thompson), and Agent H (Chris Hemsworth). Together, the two must stop the villainous Hive and uncover the truth about a mole inside the Men in Black. Along the way, a tiny, quippy alien nick-named Pawny (Kumali Nanjiani) pledges his loyalty to M, promising to help her with whatever she needs. Pawny has an important role in the film, but it’s clear that Sony really included him to make kids laugh with Minion-esque lines like “THAT WAS AWESOME!”Rounded out by a standard Liam Neeson performance as High T and a fantastic turn by Emma Thompson as Agent O, Men in Black: International checks all the necessary celebrity boxes to attract every audience demographic.

Thompson and Hemsworth both chew up the scenery whenever they are onscreen and Thompson especially does  a great job in what is likely her biggest part yet. The co-leads play vastly different characters, but they both do it with a sense of charisma that makes it easy to root for them throughout the film. While the big sell of the movie is supposed to be the chemistry established between the stars in the Marvel Cinematic Universe — the film even has a heavy-handed Thor reference featuring a hammer — Men in Black: International seems to coast on their previous connection instead of giving their new characters any real chemistry. There are a few moments where the duo bicker and riff off of each other fairly well, but for the most part, they’re unable to match the spark that made Jay (Smith) and Kay (Tommy Lee Jones) such dynamic on-screen partners.

Part of what makes the movie so enjoyable is the fact that both protagonists have noticeable, believable character arcs. At the start of the film, Molly is just a young, dedicated girl on a mission to prove that aliens are real, but by the end, she is an essential member of the Men in Black, putting her knowledge to work keeping the world safe. On the flip side, H, who is praised as one of the agency’s best members, starts the movie as a self-absorbed partier who slowly proves to himself that he’s still capable of being great. Throughout the course of the movie, M and H push each other to grow and consider their surroundings in a different way, something that gives the fantastical film some stable emotional ground at its foundation. 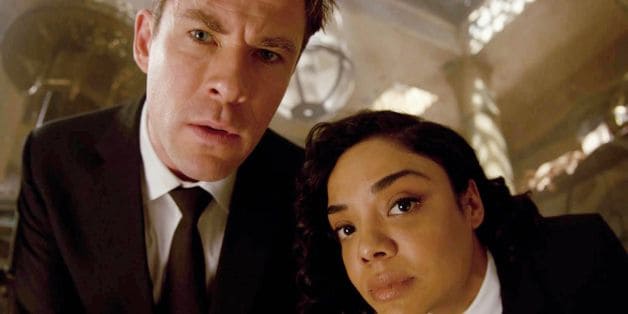 Despite all the movie’s strengths, it falls victim to the classic blockbuster trope of revolving around a MacGuffin. Instead of truly diving into the villainous alien force known as the Hive or the global implications of a HYDRA esque takeover of the Men in Black, the story focuses on the hunt for a star-powered gun capable of destroying entire planets. Part of what makes the original Men in Black such an interesting film is the slow, methodical breakdown of the villain Edgar, but in Men in Black: International, the story quickly bounces around dangerous situations instead of taking its time to develop each threat.

Directed by F. Gary Gray, Men In Black: International is certainly pretty to look at. The visual effects team does a great job rendering a world where humans and aliens live together. Every alien, whether a hulking beast or a tiny creature scooting around the floor, is intricately and beautifully designed. Expanding the scope of the Men in Black franchise and highlighting multiple countries around the world allows the movie to feature a lot of unique locations and vibrant colors. Not only do we get to see how aliens live and interact with people in cities like New York and London, but we also get to see how aliens have adapted to life in the desert or an African bazaar in a way that makes the whole world feel more believable and developed.

In all the best ways, Men In Black: International feels like a classic summer movie. A healthy mix of action and comedy, there is never a moment where the movie feels boring or like it’s dragging on too long. Sure, there are a lot of eye roll-worthy moments, but for the most part it’s a funny, entertaining film. Unfortunately, Men in Black: International doesn’t include a new theme song or even reference Smith’s classic anthem, but I’ll let it slide this one time. Trust me when I say this is probably the best movie about people wearing suits and sunglasses you’ll see all summer.