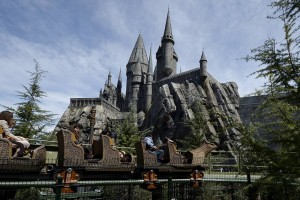 NBCUniversal is moving from the muggle world to the magical world of Harry Potter with a newly inked deal with Warner Bros. The deal will give NBCUniversal exclusive on-air and digital rights for  author J.K. Rowling’s Wizarding World properties including Fantastic Beasts. The deal also includes cable TV rights, which are currently owned by Disney, for all eight Harry Potter films.  The movies will mainly air on USA and Syfy channels.

The Walt Disney Co. will retain rights until June of 2018; at which point NBCUniversal will take over in what could be one of the biggest movie franchise deals in history, according to the Wall Street Journal. Although terms of the deal were not made public, sources close to the agreement said it could be valued as high as $250 million.  A NBCUniversal spokeswoman would only state that is the largest movie acquisition in company history. Don’t be so modest – NBCUniversal will capitalize on this by attracting younger viewers and building upon its theme parks.

Disney had sought to keep the relationship with Warner Bros. for the franchise but ultimately, money talks; NBCUniversal was willing to pay a higher price. Warner Bros. president of Worldwide Television Distribution, Jeffrey Schlesinger, had this to say about the acquisition:

“NBC was willing to step up significantly to acquire the franchise, it made sense to marshal all the assets we have.”

The Harry Potter movies will become available to NBCUniversal on July 1, 2018; the eight year deal will run through 2025.