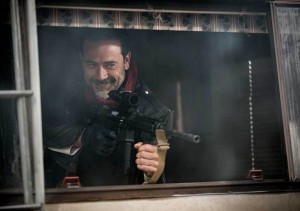 Already a fan-favorite in the comic books, Negan was introduced on The Waking Dead TV show in the season 6 finale and will be making quite an impact. He has already dispatched one of our heroes (we still don’t know which one) with his weapon of choice “Lucille,” and if the show even follows the comic book closely, will be a thorn in Rick’s side for the foreseeable future. So what exactly will his impact on The Walking Dead be? Recently executive producer Gale Anne Hurd was able to shed some light on just how badass Negan will be and what actor Jeffrey Dean Morgan will be bringing to the next season of The Walking Dead.

“I think Negan is the ultimate villain. He’s been the ultimate villain in the comic book, and I think Jeffrey Dean Morgan is bringing him to life the way that I imagined because he is larger than life, he is charismatic, and he really enjoys what he does. He doesn’t seem to have much of a conscience about it, and that’s the kind of person we haven’t seen before. Everyone else had a justification that they were reasoning as to why they did what they did, some of the evil things. They always had an excuse. Well, Negan rules.”

Even the Jeffrey Dean Morgan knows that his character will not be a fan-favorite for his actions. While on the set of his other show The Good Wife, Morgan had a message: