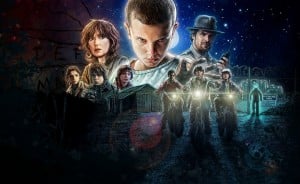 When Stranger Things launched on Netflix in July, 2016 it quickly became a pop culture phenomenon and garnered critical praise from critics and fans of genre film alike. Viewers praised the science-fiction horror series for emulating the tone and style of various 80s films, television shows and novels including, but not limited to, the works of Steven Spielberg and Stephen King.

With narrative and aesthetic similarities to popular 80s works including E.T. the Extra-Terrestrial and The Goonies, Stranger Things became the embodiment of nostalgia driven entertainment for many who grew up during the nineteen-eighties. So it would seem inevitable that the series would become the subject of CineFix‘s long-running Youtube series 8-Bit Cinema, which recreates memorable scenes from various films and television shows in the style of 8-bit third generation video games.

Echoing the format of 80s RPG titles including The Legend of Zelda, the newly released video should appeal to fans of both the series and classic video games from the era. Viewers should be warned that because the video re-imagines some of the most memorable sequences from the series, there are very big spoilers regarding how the shows story unfolds.

You can watch the entire video below.

Stranger Things season one is now available on Netflix.