With still over two years until Infinity War‘s theatrical premier, it looks as if production is gearing up as filming for the epic movie is set to begin in November. Although filming hasn’t quite started yet, the cast are preparing themselves so they’re ready to nail their scenes when the time comes. A new set image has surfaced online of Josh Brolin preparing himself by rehearsing as the film’s antagonist, Thanos. The Russo Brothers posted this image to their Facebook: 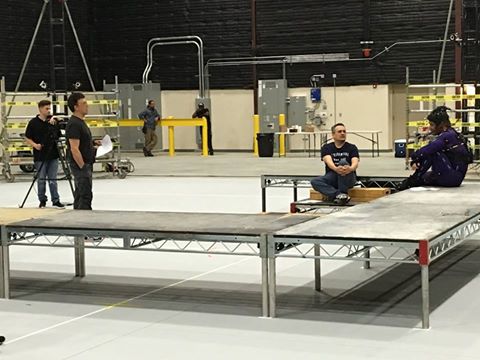 This is the first real image we’ve gotten as Brolin rehearing as Thanos for Avengers: Infinity War, but I’m sure this won’t be the last. Infinity War will essentially be the culmination of the first three Phases of the Marvel Cinematic Universe, pitting basically every Marvel character against the Universe’s biggest big-bad, Thanos. Thanos has spent the first two Phases of movies collecting Infinity Stones needed to complete his Infinity Gauntlet, which will give him the power to take over the entire Marvel Universe – unless the Avengers have anything to say about it.

Although originally Infinity War was split into two movies, both of which being one half of the same overarching plot, new announcements from the Russo Brothers have contested that saying the stories will in fact each have their own individual plots. As of right now, all we can do is focus on what we do know about Avengers: Infinity War, and wait to hear what they decide to do with the second film.

Are you excited to see Brolin face off against the entire MCU in Avengers: Infinity War? Let us know below in the comments.