At this year’s San Diego Comic-Con, Warner Bros. and DC Films were riding high. After 2016 was a bit of a rough year critically for the DC Extended Universe, Wonder Woman stormed into theaters this summer and easily became a critical and commercial success. So because of that, DC was smart to make sure Diana was the first major hero we see in the latest trailer for Justice League.

Not only did we get an incredible new look at the highly-anticipated film, we also got a brand new official poster. This Alex Ross-inspired design is one of the most incredible posters for a comic book film in recent memory and shows a sign that DC is trying to find the right core for these heroes.

The poster design also featured the tag line, “You can’t save the world alone.” The tag line also featured each of the six heroes’ character logo embedded within the phrase, symbolizing unity between the league to stop the looming threat that is  Steppenwolf and the Parademons.

Thanks to DCComics.com, a brand new promotional banner for Justice League has been revealed. It features Batman, Wonder Woman, Aquaman, The Flash and Cyborg together in the same pose from the most recent poster, but instead of the text in front of the heroes, this time around the text is behind them.

Instead of, “You can’t save the world alone,” the shorter phrase behind the team is, “League up.” You can see this new promotional banner down below. 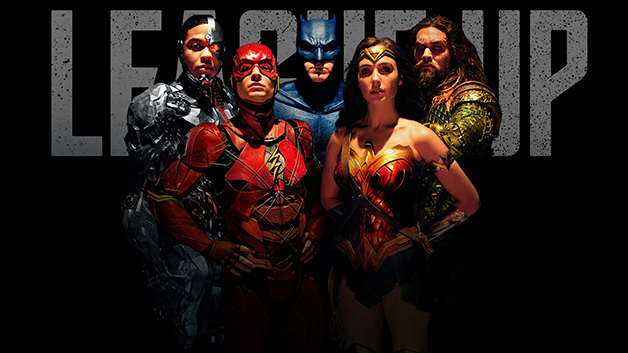 The Ross inspiration still remains, and given that it invokes a classicism and near-godlike position for DC’s heroes, hopefully the marketing even beyond the release of Justice League can take that inspiration and run with it for future films like Aquaman and Shazam.