During a recent charity auction, a new logo for Sony’s Bloodshot was revealed in an unlikely source.

The charity auction in question was held by Gamers4Paul. The organization is a charity organization that gives money to the late Paul Walker’s Reach Out Worldwide foundation. One of the objects that was put on auction was an Xbox One with a different logo then what we have seen before.

The image in question has the Bloodshot title across the Xbox with a black background. Bullet holes, blood and bullets can be seen around the top of the console as well. In additon, a target can be seen in the bottom right corner with Vin Diesel’s name over it. You can see the full image below. 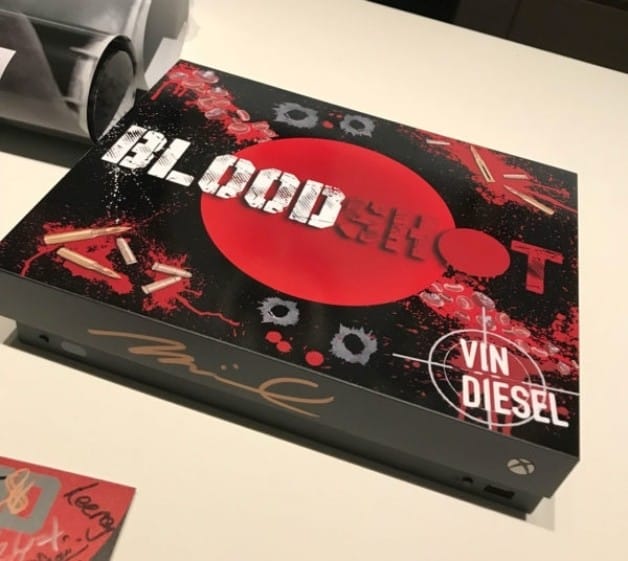 From the look of things, Vin Diesel has no interest in letting his late friend’s work fade into obscurity.

Paul Walker, as we all know, sadly died in a car crash in 2013 while on break from filming Furious 7. The film was dedicated to his memory and concluded his character’s story arc in the franchise. And from the look of things, his friend and co-star will keep his memory alive for as long as he is able to.

Here is a plot synopsis for Bloodshot:

Bloodshot follows Ray Garrison aka Bloodshot, a deceased soldier resurrected by weapons contractor Rising Spirit Technologies through the use of nanotechnology. Suffering from total memory loss but imbued with an array of staggering new abilities, Ray struggles to reconnect with who he was while learning what sort of weapon he has become…aided by a team of fellow augmented combatants codenamed Chainsaw.

Bloodshot is set to premier sometime in 2020.