Matt Damon is back and ready to kill in a recent still from his forthcoming return to the Bourne Franchise. The last time we saw Matt Damon as Bourne was in 2007’s The Bourne: Ultimatum. This makes it about 9 years since Damon/Bourne have graced the big screen. Although no further information was released with this still, a new full length trailer premiered at Cinema Con and this still is more than likely from that trailer. During Cinema Con at the Universal panel, Producer Frank Marshal unveiled a new trailer. He hyped it up by saying that an action sequence featured in the trailer that filmed in Vegas was “the best Bourne chase ever.”

If that gets you excited you’re gonna want to check out the description of the trailer and a new still below: 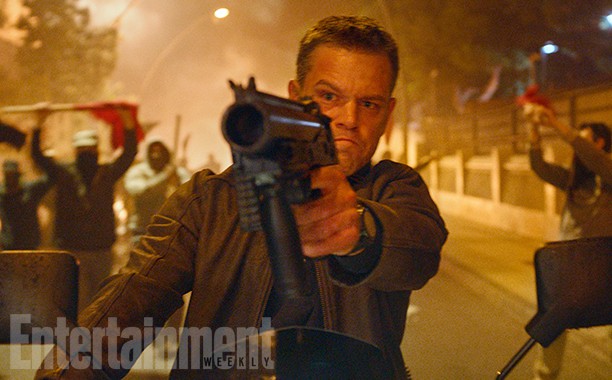 In the trailer, Jason Bourne reunites with the character played by Julia Stiles who you definitely just remember as “Julia Stiles,” another ex-government agent we last saw on the run in Ultimatum. The third film ended with Bourne remembering everything about his pre-amnesiac life, but Stiles has a challenge for him: “Remembering everything doesn’t mean you know everything.” CUT TO: Government agents, including franchise newcomer Alicia Vikander, reacting to a hack that they claim could be “Worse than Snowden.” The hack apparently comes from Bourne and leads the government to chase after him. That chase leads to Greece, where Bourne rides a motorcycle through a riot. Tommy Lee Jones is apparently the film’s new Chris Cooper/Brian Cox/David Straithairn analog, the nefarious government dude out to get Bourne. Somehow all of this leads to Bourne driving a car really fast down the Las Vegas Strip, causing what looks like a 20-car pile-up, and then driving a SWAT van into the MGM Grand.

We don’t know when this trailer will be released, but it sounds action packed and I’m personally looking forward to checking it out.