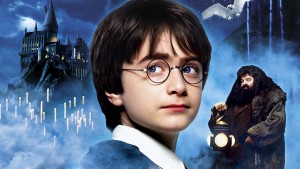 Fans of J.K. Rowlings Wizarding World of Harry Potter will not have to wait much longer for more magic. This fall, three new titles will debut, each offering its own unique, interactive fan experience.  The first title, J.K. Rowling’s Wizarding World: Movie Magic Volume One: Extraordinary People and Fascinating Places,  offers fans a behind the scenes look of how each of the eight Harry Potter films were made. The Harry Potter world meets the coloring book craze (!) with Harry Potter: Winter at Hogwarts: A Magical Coloring Set.  Both titles are set to be released on October 18th.
The last of the three is an interactive pop-up book titled J.K. Rowling’s Wizarding World: A Pop-up Gallery of Curiosities (release date: November 1st). The book covers and their descriptions are below. Enjoy! 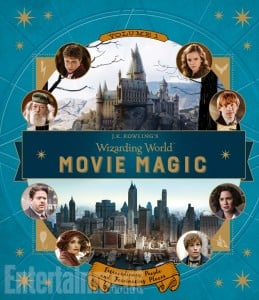 Featuring all eight Harry Potter movies and the upcoming movie Fantastic Beasts and Where to Find Them, this magical book is the ultimate insider’s guide to the films from J.K. Rowling’s Wizarding World for young fans.
From the gilded halls of Gringotts and Hogwarts to the New York City of Fantastic Beasts and Where to Find Them, each page of this book delivers a fun, interactive experience for young readers as they discover how the extraordinary places and fascinating characters of the wizarding world took shape onscreen. Filled with lift-the-flaps, stickers, and other engaging inserts, this engrossing book overflows with captivating facts about the movie magic used to create a world fit for witches and wizards. Including insights from the actors who played Harry Potter, Professor Dumbledore, Newt Scamander, and many more, this book is a must-have for young fans of the Wizarding World. Author: Jody Revenson 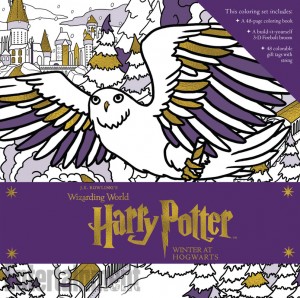 An interactive coloring set featuring everything needed for Harry Potter fans to explore the color of the winter season and share it with friends and family.
From the snowy Great Hall to the Yule Ball, the winter season at Hogwarts is truly magical. This fun, interactive set features everything Harry Potter fans need to explore the color of the season. 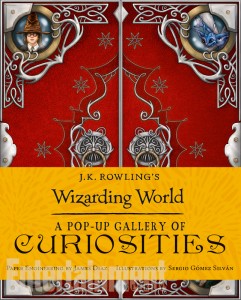 J.K. Rowling’s Wizarding World is full of magical curiosities: a flying car, a hat that sings, an enchanted case, and so much more. This small, deluxe pop-up book showcases three-dimensional renderings of some of the beloved curiosities from the Harry Potter films, including two pops related to the upcoming Fantastic Beasts and Where to Find Them. Pull out flaps will feature text that delves into the items on each spread and how they were achieved in the films.
This book features doors that open from the middle of the front cover, a sturdy magnetic closure, and elastic loops to hold each pop firmly in place making it a perfect stand-alone display. By James Diaz illustrated by Sergio Gómez Silván.