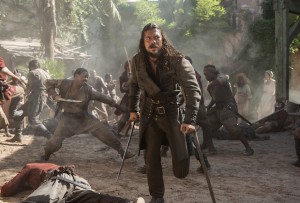 Black Sails, the Starz sleeper hit for the past three seasons told the stories of pirates set in New Providence during the Golden Age of pirates. The series operates as a prequel to Robert Louis Stevenson’s novel Treasure Island, detailing the events 20 years before the book. Black Sails told the stories of Captain Flint, Captain Vane, and Captain “Long” John Silver as they fought British rule of the Bahamas. Being a Starz series, the show meshed the right amount of sex and violence while telling engaging stories of the pirates of the past.

In a very “last stand” type of approach, it appears that this season will be the final battle between the pirates of Nassau against the British government. Keeping with the show having backstabbing pirates, it appears that they will not remain on the same side throughout the final season as we see Billy standing up to Flint and John Silver rising to power as well. They all will have to deal with a fully recovered Governor Rogers who will want to remove them from their paradise.

Black Sails returns for the final season January 29, 2017, on Starz.