Netflix’s 80s nostalgia driven series Stranger Things became a pop culture phenomenon this past summer and viewers are already speculating on how the unsolved mysteries from the first season will be addressed in season two. At New York Comic Con cast members Millie Bobby Brown and David Harbor spoke to a crowd at the Javits Center about the upcoming season.

“We did get the first couple scripts and it’s insane,” Harbor told the audience. While Brown and Harbor were tight lipped about how the next season will unfold, they did tease that the love triangle between Jonathan, Nancy and Steve will be explored further in season two. “[It’s] one of the great love triangles of the series. Even when I was watching I felt torn,” Harbor told the crowd. “They both were so three dimensional… There will be more of that for seasons to come.”

Millie Bobby Brown weighed in on the shows love triangle as well, even providing a possible solution to the romantic turmoil. “Anything can happen,” she said. “But I’m okay with [Steve and Nancy]. I just think Jonathan… Imagine if Barb came back and Jonathan and Barb were dating. That would be incredible.” 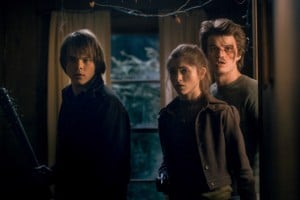 That may be wishful thinking on Brown’s part as both cast members were adamant that Shannon Purser would not be reprising her role as Barb Holland in season two. Brown did have one wish for her character next season though: Less waffles in Eleven’s diet. “I like them. I do. I do not like how many I eat,” she explains. “The amount I eat is actually really hard to digest.”

Later, Habor spoke about is process for getting into character:

“For me, I don’t do the Jared Leto stuff with like sending dead pigs to people on set, but I do have a particular brand of method to what I do, which just means I like the experience that I have to be authentic and personal and so that can’t happen unless I sort of carry around a little bit.”

Habour explained that the combination of his characters demeanor and the shooting location made for a difficult time when getting into character. “Atlanta shooting was a very difficult experience because Hop is a lonely sort of sad guy. So, I definitely carried that away,” he said. “Atlanta is a very easy place to be sad and lonely.”

The second season of Stranger Things is scheduled to debut on Netlix in 2017.