In a recent post, someone cited the similarities between the Odin that Hela knew before Thor was born and Odin as he appeared in Thor: The Dark World after the death of Frigga.

The post in question stated that audiences caught a gimps into the man that Odin was as Hela knew him in the second Thor film:

After the Dark Elves attack, in The Dark World, Thor sees a glimpse of the Odin that Hela says she knew.

The post then shows a comparison of Odin speaking to his son with the images of his history with Hela beside him from Thor: Ragnarok. You can see the full image below: 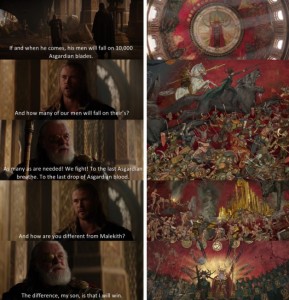 The images of course refer to Odin’s past. One of Ragnarok’s big twists was that Odin in fact had another child who helped him shape Asgard into what it eventually became. She was eventually sealed away by Odin after her bloodlust became to insatiable for Odin to tolerate. And from what we see here, we had a taste of that character in The Dark World.

During the events of the film, the antagonist, Malekith, attacked Asgard, killing many people, including Odin’s wife. Odin decided seal Asgard and prepare for another attack and make ready for a full scale war. At this point, he was ready to sacrifice anything and everything for victory.

What do you all make of this comparison? Would you like to have seen more of the Odin that Hela knew? Let us know what you think in the comments below!

Thor: The Dark World and Thor: Ragnarok are both available to own on Digital HD, 4K Ultra HD Blu-ray, Blu-ray and DVD. Chris Hemsworth was previously seen as the character in Avengers: Infinity War and is expected to reprise the role in Avengers 4 next year.