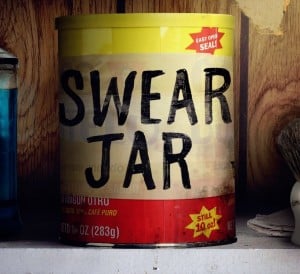 If you are like most of the country, Luke Cage pretty much took over your weekend this past Friday. The 13 episode debut of Luke Cage’s own series gave a unique look of Harlem and it’s new hero. In addition to the titular hero, the show had a great secondary cast, as well as great musical guests including Raphael Saadiq, D-Nice, Faith Evans, Charles Bradley, Jidenna, The Delfonics, and Sharon Jones & The Dap Kings. Turns out Luke Cage almost had another surprise guest, and that guest was the source of the “Swear Jar.”

The "Swear Jar" was for Prince. I was going to show him the first two episodes and convince him to play in episode 13.

Prince had a “no cursing” policy in his music and his life thanks in part to Muhammad Ali.

“Marsha Ambrosius, Lianne La Havas and Janelle Monáe are all my sisters. We shouldn’t curse at them. “We need to treat them, and all people, like royalty. Did you ever hear Muhammad Ali curse? Would you curse in front of your kids or to your mother?” –Prince

Coker wanted Prince to be on Luke Cage, and to show how serious he was, he made sure that the swear jar was a part of the show. It was a subtle way to lure Prince to be on the show. Cocker’s plan was to show Prince the first two episodes with the hope of him showing up on finale, “You Know My Steez.” Unfortunately, Prince passed away before that could come to fruition.