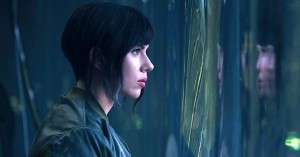 During the season 2 finale of Mr. Robot, Paramount dropped segments of the first Ghost In The Shell trailer starring Scarlet Johansson. The trailer was split up into five different segments, all containing spooky music, and stunning cinematography. It appears the marketing worked spectacularly. The advertisements appeared almost as if the TV was being interrupted. This led to many watchers googling Ghost In The Shell during the finale’s slower moments.

Now, if you do not know anything about Ghost In The Shell, here is a quick recap. The film is based on an extremely popular manga series from the 1990s, by Masamune Shirow. The story revolved around Motoko Kusanagi, a field commander who works for the Public Security Section 9. The series was met with critical acclaim and has had an impact on modern science-fiction including The Matrix. Thus, when a live-action American adaptation was announced, many were concerned over the “white-washing” involved in the movie’s cast.

Now, back to the trailers. Paramount explained their remarkable marketing in an interview with Deadline. Paramount’s President of Worldwide Distribution and Marketing, Megan Colligan believes:

“The great thing about season premieres and season finales is that they’re like live sporting events: People want to watch them in real time. Because of the social media explosion, there’s a fear of missing out or having a plot detail spoiled. We knew with the Mr. Robot finale we’d get that extra boost of people who would be sharing on social.”

When asked why the studio chose Mr. Robot of all shows, the answer was rather simple.

“[Ghost In The Shell] is a movie about glitches and technology, and that fits well thematically with Mr. Robot.”

Colligan went on to discuss the film’s importance in today’s culture:

“Ghost in the Shell is so original in its own right that it had to have a special execution to kick it off. We needed a launch that was as unique and original as the property itself. You’ll soon learn about the glitch, it’s one of the most important parts of the film’s storytelling. It was important to present the earliest advertising for this film as a glitch instead of something more traditional.”

Despite the claims of white-washing, it appears that has not stopped the film’s trailers from raking in over 12 million views on YouTube, as well as countless mentions on other social media platforms. As for when the film will release its first official trailer? Colligan is unsure, saying “[Paramount] is going to have some more fun with this for a little while longer.”

So what do you guys think? Are you excited to see Ghost In The Shell? The film is set to hit theatres everywhere on March 29, 2017.