The newest trailer for Pirates Of The Caribbean: Dead Men Tell No Tales, the fifth installment of the franchise, offered fans a glimpse at the next adventure with Captain Jack Sparrow. Now, Disney has released a brand new international poster for the upcoming film that offers a preview of some of the dangers Jack Sparrow will face in his next outing.

The new one-sheet features the eccentric Captain accompanied by allies and foes as zombie sharks loom over them in the background.

You can check out the new poster below! 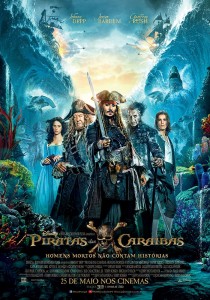 Here is the official synopsis for the movie:

Pirates of the Caribbean: Dead Men Tell No Tales will be released in theaters on May 26, 2017.