Anticipation is increasing as the first ever live-action Pokémon hits theaters in three months. Detective Pikachu is reportedly already receiving extremely positive buzz with Warner Bros. already developing a sequel. Detective Pikachu could also be the first in a cinematic universe, with a Red and Blue film rumored to be in the works as well.

At this week’s 2019 American International Toy Fair, new trading card sets were revealed, featuring the movie version of characters set to appear in Detective Pikachu. The new sets announced include a Special Cast File, Charizard-GX Case File, Greninja-GX Case File, and a Collector Chest. You can check out a sneak peek at the Charizard-GX set below: 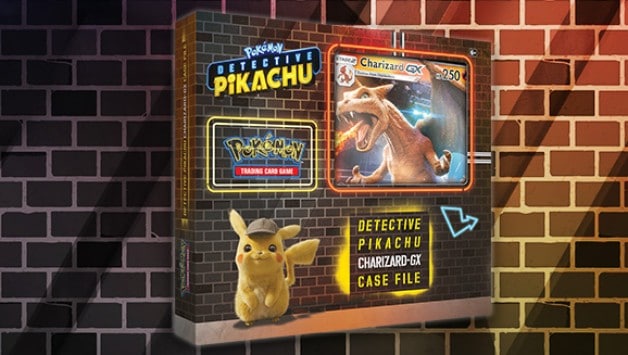 Will you be purchasing this movie-tie in set? Comment below!

The story begins when ace private eye Harry Goodman goes mysteriously missing, prompting his 21-year-old son Tim to find out what happened. Aiding in the investigation is Harry’s former Pokémon partner, Detective Pikachu: a hilariously wise-cracking, adorable super-sleuth who is a puzzlement even to himself. Finding that they are uniquely equipped to communicate with one another, Tim and Pikachu join forces on a thrilling adventure to unravel the tangled mystery. Chasing clues together through the neon-lit streets of Ryme City—a sprawling, modern metropolis where humans and Pokémon live side by side in a hyper-realistic live-action world—they encounter a diverse cast of Pokémon characters and uncover a shocking plot that could destroy this peaceful co-existence and threaten the whole Pokémon universe.

Detective Pikachu will be released in theaters on May 10, 2019.