NBC has unveiled the new poster for their latest show, Powerless, a workplace comedy set within the DC Comic universe about an insurance adjuster and her colleagues. The NBC show will be distinctly different and separate from other TV shows based on DC properties.

In revealing the poster, NBC have also announced that Undateable star Ron Funches has joined the cast as Ron, the IT guy. Ron unlike the rest of the team, has not lost his enthusiasm for the superheroes in the world they inhabit.

Designed by DC Comics artist Neal Adams, the poster will be available at the WB booth at Comic-Con. Check it out below. 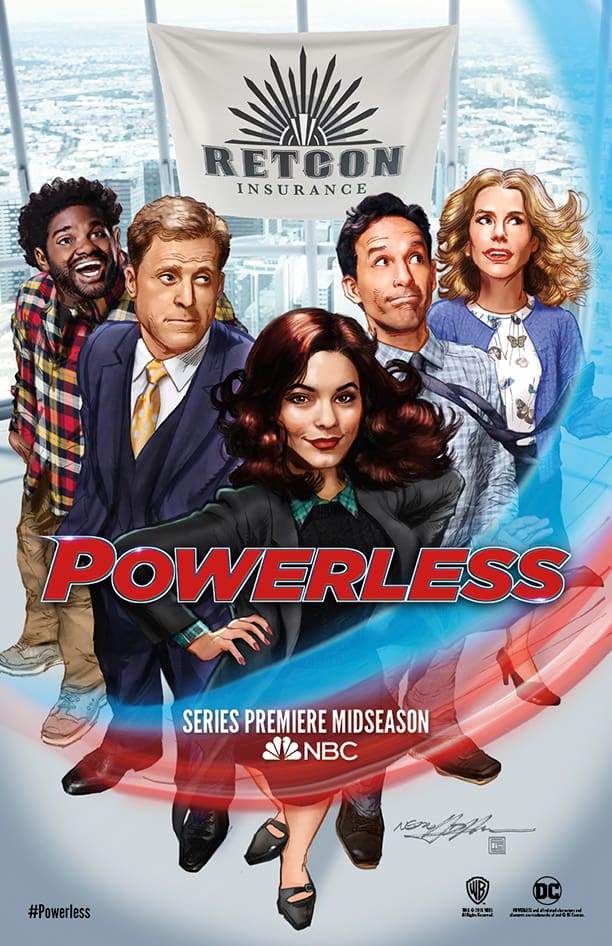 Vanessa Hudgens stars as Emily, a spunky young insurance adjuster specializing in regular-people coverage against damage caused by the crime-fighting superheroes. It’s when she stands up to one of these larger-than-life figures (after an epic battle messes with her commute) that she accidentally becomes a cult ‘hero’ in her own right … even if it’s just to her group of lovably quirky co-workers.

Now, while she navigates her normal, everyday life against an explosive backdrop, Emily might just discover that being a hero doesn’t always require superpowers.

Powerless will debut mid-season on NBC.