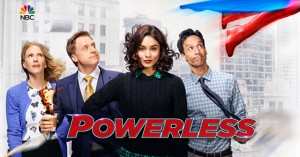 NBC Universal held their Upfront presentation today in which they debuted the trailer for the upcoming DC Comics comedy show Powerless. The show is supposed to tackle the idea of what life is like as a normal human being in a world where superheroes exist.

NBC has not posted the trailer online likely due to the show premiering in the mid-season, so continue reading for the description of the footage.

The trailer begins noting “the next great hero” is on their way, and we see imagery of Batman and Superman facing each other that looks like an altered Batman v Superman promotional image.

We see main character Emily (Vanessa Hudgens) riding a train to work with other morning commuters, when a big battle involving the DC’s Crimson Fox (Atlin Mitchell) causes the train to derail. Crimson Fox catches the train, but Emily, unimpressed by what’s happening, looks out the window and asks the superhero, “Sorry to interrupt, could you put us back on the tracks?” while another woman yells, “My shift at Orange Julius starts at 9!”

We get more of a look at life in this reality where the DC superheroes are a fact of life, as Emily notes in a voice over she’s “a claims adjuster for a very special kind of insurance company.” We see one of Emily’s coworkers ask, “Since the damage was caused by Wonder Woman, should we deny as an act of god?,” to which Emily replies, “Technically, she’s a demigod, so it’s kind of grey area.”

Emily is shown meet her new boss, Del (Alan Tudyk), who turns out to be something of a nightmare – demanding a “25% increase in denials by the end of the month.”

As Emily stands up to Del, she begins to feel more empowered and “I Need a Hero” (from Footloose) plays, as she walks into the office in slow-mo, her long coat flapping like a cape around her. She’s also seen interacting with her friend and coworker Teddy (Danny Pudi), who asks her, “Can I be your sidekick? I’ve got a utility belt.”

During all of this, we continue to see examples of the DC heroes permeating the existence of these characters . Hawkman is shown on the cover of Rolling Stone, looking very much like his classic, bare chested comics incarnation more than the Legends of Tomorrow version. And we see someone yell, “He’s not Green Lantern! I have proof!” about a good looking man with dark hair.

The trailer made very clear Powerless will not hold back from direct references to DC Comics characters with references to Wonder Woman, Green Lantern, Hawkman, and Aquaman. Because of this, the show seems to clearly exist in its own universe, as heroes have not existed for long enough in the DC films nor CW TV shows.