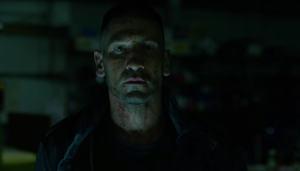 It was recently revealed that Marvel’s fifth show on Netflix would, in fact, be a standalone series for Jon Bernthal’s Frank Castle/The Punisher. In a new set image, the show revealed a unique spoiler featuring a character who helped The Punisher in season 2 of Daredevil.  The character brilliantly appeared in season 2, giving us a glimpse of what is to come in the Marvel Cinematic Universe’s Netflix chain. With new information and set images leaking from the show every day, surprise surprise, today is no different. For those of you who have not watched Daredevil‘s fantastic second season, I seriously recommend doing so before reading the following.

In Daredevil season 2, The Punisher became close with Matt Murdock’s secretary and former lover, Karen Page. The two had a connection that many hoped would be continued in later seasons of Daredevil and the subsequent series, The Punisher. In Daredevil, where everybody denied supporting Castle in law, Page was one of the few who fought hard to keep the man out of bars.

In a new set image from The Punisher, it has been revealed that Karen Page will, in fact, appear in the show. While many wonder what Page’s role will be in the show, nothing is revealed, other than her friendship with Castle continuing, something many fans enjoyed about Daredevil season 2.

So what do you guys make of this? Are you excited to see Bernthal return as Castle? The Punisher currently has no release, but is expected to drop in 2018.