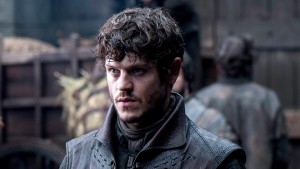 During the “Battle of the Bastards,” Game of Thrones villain, Ramsey Bolton got his comeuppance in a much-deserved fashion. Not since Joffrey’s poisoning did fans rejoice that the bad guy actually got a well-deserved death. Even more satisfying is that he was dispatched by his own dogs which he has used to kill whomever he please and was ultimately eaten alive by them. While the scene was somewhat gruesome, the audience was only briefly able to see the carnage. We got to see Sansa Stark’s reaction while we heard Ramsey’s screams as she gleefully walked away.

Turns out, according to the special effect company Image Engine that made that scene and many scenes for Game of Thrones, the death was supposed to be much gorier. Visual effect supervisor Mat Krentz explains.

A CG jaw was also created and was animated to reveal it being ripped apart by the dogs and reveal gums and skin being ripped apart. Unfortunately, the effect was deemed too gruesome and producers opted for a more sensitive scene instead.

The creative team has been responsible for many of the deaths in the most recent season. More than 72 on screen deaths were assisted by CGI efforts from the special effect company. Despite the deaths looking rather practical and realistic, a great deal of effort was made by the company. Composition lead Edwin Holdsworth explained the process of the effects for all those deaths.

“Some shots were really specific, like someone getting their head smashed directly against a wall. To get the look right for that we filmed real meat being smashed. We used the same technique for shots where one character has their hand pulled apart. The best way to match the level of gore needed was to pull some meat apart, and use that in the comp. It all felt more realistic that way!”

In addition to the deaths, the special effects company used practical and digital effects for everything from Jon Snow’s wounds, to giant Wun Wun, to the digital building and landscapes including The Wall and the citadel.

Take a look at the season six FX breakdown.

Game of Thrones returns for Season 7 next summer.